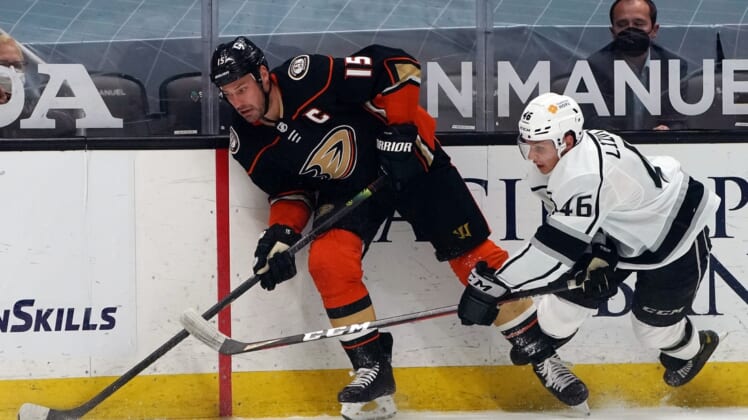 The Anaheim Ducks were feeling fine after rallying from two goals down to beat the Colorado Avalanche in overtime, 5-4, on March 6.

Anaheim will return to Denver on Tuesday night, but things haven’t been going as well.

The Ducks not only have lost three in a row — two of those came in blowouts. They’ve been outscored 14-2 in the losses, frustrating Anaheim coach Dallas Eakins ahead of the next game against the Avalanche.

“We’ve got to get this together and quit hanging our heads, feeling sorry for ourselves or whatever you got going on,” Eakins said. “You got two jobs. Play for each other. Play to win. And it doesn’t matter what the score is or if it’s back-to-back or three games in three nights if they want to throw that at you.

“You have to come in and play for each other, play to win, play within structure and stick with it no matter what.”

With Anaheim in last place in the West Division, trade speculation has amped up ahead of the April 12 deadline. Everyone from franchise icon Ryan Getzlaf to goaltender Ryan Miller has been involved in trade scenarios.

It is understandable that the Ducks would be sellers, but if Colorado is to make any moves, it would be as a buyer. The Avalanche are in third place in the division and are getting healthier. Nathan MacKinnon has returned from missing three games with an upper-body injury and has two goals in the three games since.

Meanwhile, about the only thing Colorado hasn’t done well in its three-game winning streak is score. The Avalanche have 133 shots on goal in that span but have just eight goals, two of them into an empty net.

They have run into hot goaltenders — the Los Angeles Kings’ Cal Petersen stopped 81 of the 85 shots he faced over two games — and they’ve had quality scoring chances. The team isn’t worried about the lack of goals.

“With the talent we have in this dressing room, we haven’t been scoring at the rate we’re used to, but that’s going to happen,” said the Avs’ Nazem Kadri, who had a goal and an assist in Sunday’s 4-1 win over the Kings. “You don’t lose that touch. Over time I think we’re going to start to wear some teams out and hopefully generate some more goals.”

A big reason Colorado has won three in a row with little scoring is a combination of goaltender Philipp Grubauer and limiting the other team’s shots. Grubauer had an 18-save shutout Friday and 27 saves Sunday. He finished the week 3-1 with a 1.24 goals-against average and Monday was named the NHL’s First Star of the Week.

“The last couple games we’ve been real solid in the (defensive) zone, our breakouts, neutral zone, tracking control, everything’s been real good,” forward Andre Burakovsky said. “It’s why we’re not giving up a lot of shots, and obviously Grubi’s been doing a great job back there. It feels good.”