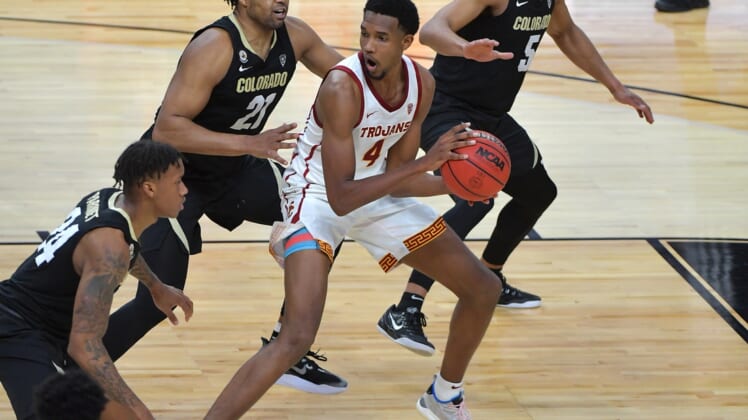 USC (22-7) returns to the NCAA Tournament for the first time since 2017. The 2019-20 Trojans were well-positioned for a bid before the COVID-19 pandemic resulted in the tournament’s cancellation.

This USC team is the fourth squad Andy Enfield has coached to the NCAA Tournament. Two of those teams — Florida Gulf Coast in 2013 and USC in 2017 — won two games each.

“Our entire team has a severe lack of tournament experience, but as a basketball player, you adjust quickly,” Enfield said. “I don’t think the moment is too big for our team. I think we’re very confident, and I think our players are more excited. They know what’s at stake. The teams that play with a very extreme confidence level and play with that swagger have a better chance of winning.”

Freshman center Evan Mobley’s last game in the tournament likely will be the final one of his USC career. He is a potential No. 1 overall pick in this summer’s NBA draft.

“I feel the spotlight on me a lot, but I’m trying to stay focused and stay ready for the game,” Mobley said.

Drake (26-4), from the Missouri Valley Conference, rallied from 12 points down, then watched as Wichita State’s 3-point attempt at the buzzer caromed off the front of the rim in a 53-52 Bulldogs win Thursday.

“To get a win for our program that hasn’t happened in 50 years, it’s really exciting,” Drake coach Darian DeVries said in his postgame press conference. “For this to be the group to do it, it’s special. It’s a dream for the players, and for us coaches.”

Drake flourished much of the season with a deep rotation of scorers but lost guard Roman Penn, who averaged 11.2 points a game, in late February with a foot injury.

ShanQuan Hemphill and D.J. Wilkins, who averaged 14.1 and 10.6 points a game, respectively, heading into Thursday’s First Four, combined for just six points against Wichita State. However, Wilkins was key in the Bulldogs holding the Shockers to just 33.9 percent shooting from the floor and 3-of-18 from 3-point range.

“D.J. held one of the best players in the country to one point,” DeVries noted of Wilkins’ defensive effort against Wichita State’s Tyson Etienne, who came in averaging 17 points per game.

USC has an edge in size with its frontcourt of brothers Evan Mobley and Isaiah Mobley at 7 feet and 6-10, respectively.