PREVIEW: Down 2-1 in series, Wild try to bounce back against Vegas

The Minnesota Wild have not lost three consecutive games this season.

They hope that trend continues Saturday when they face a 2-1 series deficit in hosting the Vegas Golden Knights in St. Paul, Minn.

After winning the opener of the best-of-seven first-round playoff series 1-0 in overtime, the Wild have dropped two straight games. The Wild will be without right wing Marcus Johansson, who suffered a broken left arm in Game 3.

Minnesota had a two-goal lead in the first period Thursday before Vegas roared back to win 5-2 on the road. Mark Stone scored twice for the Golden Knights, who outshot the Wild 36-9 after the first period.

What went wrong for the Wild?

“Everything,” forward Ryan Hartman said. “We left (goalie Cam Talbot) out to dry a little bit there — a lot. … We had no possession, no work ethic, no battle. We got away from our game, and we let them dictate. We gave them everything there.”

Stone got the Golden Knights on the scoreboard in the second period. Less than a minute later Vegas gained a man advantage after a penalty, and even though they didn’t score on the power play, the momentum had shifted. 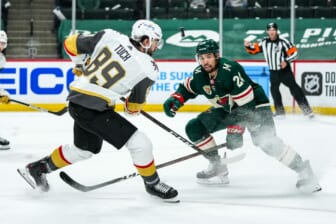 “This team is a team that comes at you in waves, and we saw it in the second and third there,” Talbot said. “If there’s any doubt in our mind, it’s going to show, so we’ve got to come ready to play on Saturday as a confident, positive group, take what we were able to do in the first period and translate it into 60 good minutes.”

Patrick Brown tied the game for Vegas at 15:19 of the second, and Reilly Smith scored the go-ahead goal a little over two minutes later. That sent Vegas to their first-ever regulation-victory at the Xcel Energy Center in nine games (3-6-0).

“I don’t think we could have played any worse in the first period,” Smith said, who has six goals and six assists in his last 10 games. “I felt like they were beating us to a lot of pucks, and we were playing slow. It seemed like we got our legs in the second period and kind of ran with it.

“We got a lot of power plays,” Smith added. “We didn’t score (0-for-5), but we built some momentum, kept the puck away from our net for most of that second and third period, which goes a long way. Get some shots to the net, and we had some big blocks.”

“‘Stoney’ needed to get a couple for us. He always brings effort and the same thing, but I think just for his own mental pressure and the pressure he puts on himself, he needed to stick one in the net — and he stuck two in the net,” DeBoer said. “Reilly Smith scored again, he’s been snake-bitten all year and has really started to heat up late.”

The Wild were set back by Johansson’s injury, when he crashed into the goal post in the first period.

“He’s a big part of our team. Obviously we lose his speed factor, a veteran presence. So yeah, he’ll be missed,” Wild coach Dean Evason said.

One possibility to replace Johansson is 36-year-old Zach Parise, who has 35 career playoff goals in 101 appearances, but has been a healthy scratch for the first three games of the series.

Another option is 20-year-old Matt Boldy, the team’s first-round pick in 2019, who has yet to see NHL action.