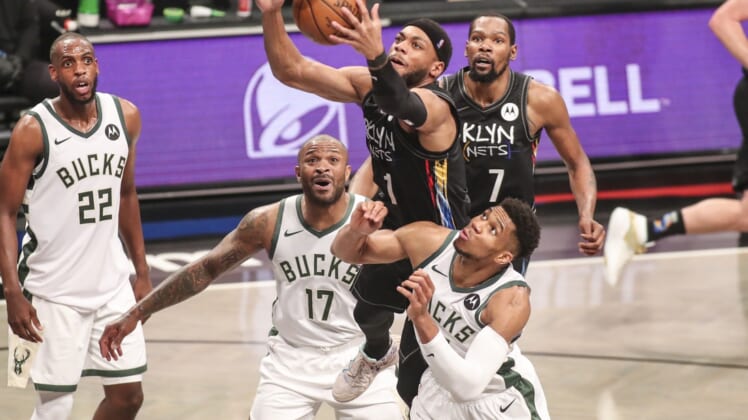 The Milwaukee Bucks hope to respond to adversity in the postseason as well as they did in the regular season when they host the Brooklyn Nets in Game 3 of their Eastern Conference semifinal playoff series Thursday night.

The Nets are up 2-0 in the best-of-seven series.

Playing at home, the second-seeded Nets dominated the first two games, winning Game 1 by a 115-107 margin before clobbering the third-seeded Bucks 125-86 in Game 2 on Monday.

The Bucks lost just four times by 20 or more points in the regular season, and each time responded with a win, beating Miami, Memphis, the Los Angeles Lakers and Orlando by an average of 18.8 points. 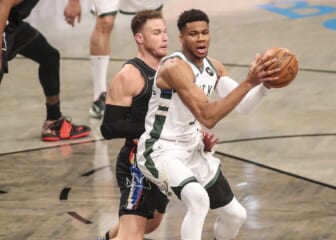 The last time the Bucks lost two in a row was in April during the regular season, and they bounced back to sweep Philadelphia in a two-game set.

Milwaukee also has a positive history against the Nets in the regular season, beating them 117-114 and 124-118 in a three-day, two-game home sequence in May.

Game 4 in this series is scheduled for Sunday, also in Milwaukee.

The Nets announced they will be without James Harden once again in Game 3. It didn’t matter in the first two games at home after the standout guard strained his right hamstring in the first minute of the series opener.

Bruce Brown started in Harden’s place in Game 2 and produced 13 points, six rebounds and four assists in a complementary role for Kevin Durant and Kyrie Irving, who combined for 54 points, making eight of their 14 3-point attempts.

Durant went out of his way to praise Brown after Monday’s win.

“A lot of teams in the pick-and-roll sell out to double-team us and we drop it off to Bruce,” Durant said. “He makes the right play.”

Brooklyn has buried its opponent under a deluge of 3-point shots in the first two games. The Nets have shot 36-for-81 (44.4 percent) from behind the arc so far in the series, taking advantage of a Milwaukee team that allowed 38.4 percent shooting on 3-pointers in the regular season, 29th in the league.

Brooklyn’s 108-42 advantage in points from deep more than accounts for the 47-point differential in the cumulative series score.

Nine different Nets have made a 3-pointer in the series; six have connected on three or more. Joe Harris has led the way with eight on 16 attempts, followed by Irving (7-for-19), Durant (5-for-10) and Blake Griffin (5-for-11).

At the other end of the floor, no Bucks player has made more than three. Khris Middleton has shot just 3-for-13, Jrue Holiday and Bryn Forbes each 3-for-9 and Giannis Antetokounmpo 2-for-8.

The Nets crushed the Boston Celtics at home by a total of 33 points in the first two games of their first-round series, before losing Game 3 125-119 at Boston. Brooklyn bounced back to win the next two games, however, to claim the series.

The Bucks have never rebounded from a 2-0 deficit to win a postseason series. They dropped the first three contests in a five-game elimination at the hands of the Miami Heat last year in the Eastern Conference semifinals.

“We’ve all seen it 1,000 times,” he said in the wake of the Game 2 loss. “We’ve got to protect our home court like they’ve protected theirs. If you’ve been in the league a long time, you’ve seen this before.”