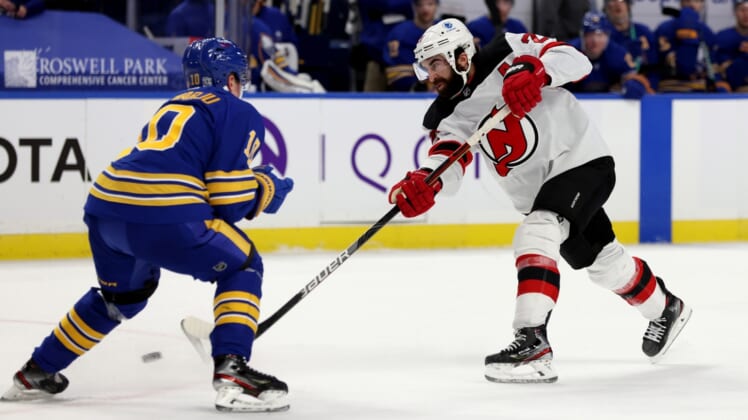 The New Jersey Devils have not experienced any negative on-ice effects from their recent COVID-19 layoff.

However, the same can’t be said for the Buffalo Sabres.

The Devils can record a fourth straight victory by handing the visiting Sabres their fifth consecutive defeat on Saturday afternoon in Newark, N.J.

On Jan. 30, Buffalo beat New Jersey 4-3 in a shootout to cap a 3-0-2 stretch. However, the Devils bounced back the next day to post a 5-3 win over the Sabres, who reportedly were not pleased that the finale of the back-to-back was even played upon learning that New Jersey’s Kyle Palmieri was added to the NHL’s COVID-19 protocol list prior to the game after playing the day before.

Following the Jan. 31 contest, both clubs were forced to halt team activities as more New Jersey and Buffalo players were added to the protocol.

The Sabres’ didn’t return to game action until Monday of this week, when they fell 3-1 to the New York Islanders. In fact, the Sabres have been outscored 9-2 while losing their first three games after their return.

“It’s a tough situation we’re in right now,” Buffalo coach Ralph Krueger said after Thursday’s 3-1 loss at Washington. “This is now psychology. This is now persistence and character, that we need to have to stick with it.

“It is certainly a confidence level that you need to have here to stick with a game where you’re not being rewarded for it.”

New Jersey, however, upon returning Tuesday, beat the New York Rangers 5-2 and did all its scoring in the second period of Thursday’s 3-2 victory at Boston. The Devils last won four straight in October 2018.

“We need to continue to play the game the right way,” Devils coach Lindy Ruff said. “We talk a lot about how we need to play. Being really good at how we want to play. We don’t spend a lot of time on how the opposition plays.

“We wanted to emphasize what we do well.”

Though Palmieri might indirectly be Public Enemy No. 1 at the moment for the Sabres, the Devils hope it’s the beginning of a productive stretch after the veteran recorded his first two goals of the season on Thursday. Meanwhile, teammate and Buffalo native Miles Wood eyes another big effort after he recorded two goals with an assist against the Sabres on Jan. 31.

New Jersey’s Mackenzie Blackwood is 4-0-1 with a 1.94 goals-against average and .945 save percentage this season. Backup Scott Wedgewood has one win with a 2.80 GAA in five starts, and stopped 28 of 31 shots at Buffalo on Jan. 30.

Buffalo’s Linus Ullmark has a 2.69 GAA this season, but would try to avoid a third straight loss if in net Saturday. Carter Hutton, meanwhile, has a 2.85 GAA while losing four of his five starts in 2020-21.

After his seven-game point streak ended in Tuesday’s 3-0 loss to the Islanders, Buffalo’s Victor Olofsson recorded his team-leading sixth goal on Thursday. He’s responsible for both of the Sabres’ goals since the COVID-19 layoff, and has four with three assists in four career games versus New Jersey.