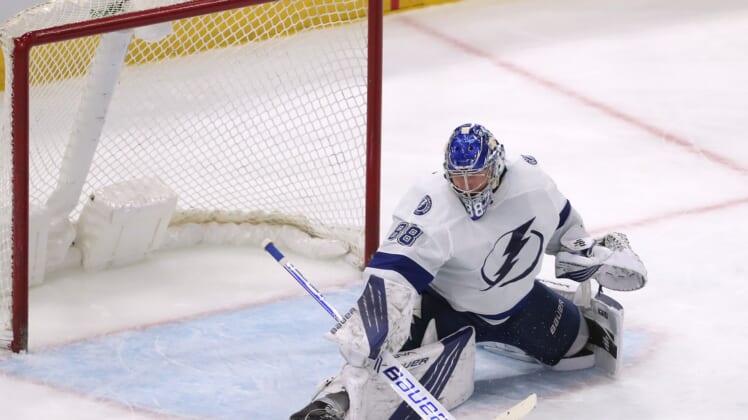 The defending Stanley Cup champions have caught fire, and a pair of games against the Central Division’s last-place team cannot be expected to cool them off.

The Tampa Bay Lightning are 7-0-1 over their last eight games and have taken over first place in the division. They now head to Detroit to face the reeling Red Wings on Tuesday and Thursday.

Tampa Bay has dominated the series in recent years, carrying a remarkable 19-game point streak (18-0-1) against the Wings, dating back to Nov. 3, 2016.

The Lighting equaled their season-high in goals Sunday afternoon in defeating Chicago 6-3. They rallied from a 3-0 deficit, taking the lead by the end of the second period with a four-goal flurry.

“Seems like we just kind of woke up,” forward Alex Killorn said. “It seemed like we were tired in the first. We don’t play a lot of the 1:30 games, not to use it as an excuse, but it seemed like we just weren’t ready from the start. Once we got those goals, those helped us momentum-wise.”

“I really enjoy the way he (Gourde) works. He wins a lot of his battles,” Killorn said. “He’s always first on pucks, and he created a ton of opportunities (Sunday). He scores the big two goals but there’s a lot of other plays that he made that were huge for us.”

Earlier in the current streak, Tampa Bay relied on a hot goaltender as Andrei Vasilevskiy recorded shutouts in three consecutive starts. Vasilevskiy gave up three goals on Sunday but the offensive support allowed him to notch his 15th victory.

He was the winning goaltender in the Lighting’s two home victories over Detroit in early February by scores of 5-1 and 3-1. Vasilevskiy has a 10-0 career record against the Red Wings.

Detroit, in the meantime, has lost three in a row, allowing 16 goals in the process. The Wings haven’t played since a 5-2 loss to Carolina on Thursday.

Coach Jeff Blashill said a few days off was a blessing.

“It was great, something we needed for sure,” he said. “What happens during the season, and especially this season, you keep plugging along and it’s hard. This gives us a chance to reset.”

Team captain and first-line center Dylan Larkin didn’t play in those games due to an upper-body injury. He returned to practice on Sunday.

“I felt pretty good,” Larkin said. “It’s kind of a day-to-day thing. The big thing is (to) see how it feels and take it from there.”

Defenseman Troy Stecher, who has been sidelined the last seven games with a lower-body issue, also practiced.

“We’ve stuck together, but we have to find a way to start getting some wins here and some positive energy,” Larkin said. “I felt it was coming, but it’s hard when the team’s on the road and you’re at home, so you’re not really in the room with the guys. I know we battle for each other and we just need some results now.”