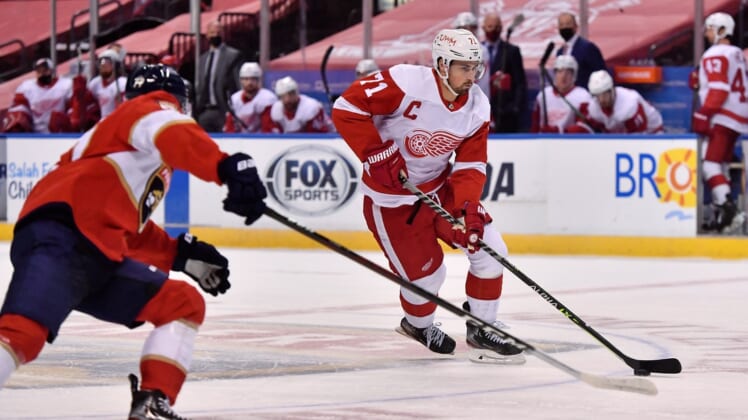 Things might finally be starting to look up for the Detroit Red Wings.

The Red Wings, who finished with the worst record in the NHL last season, handed Florida its first regulation loss of the season Sunday and lost by a narrow 2-1 margin to the host Panthers on Tuesday, with the game decided by a fluke goal that bounced off an attacker’s shoulder and into the net.

The Red Wings remain in last place in the Central Division but have a chance to get out of the cellar when they wrap up a six-game trip with a two-game series at seventh-place Nashville starting Thursday.

“We need results, and we need them now, with the hole we dug ourselves into the past couple of weeks,” Red Wings forward Dylan Larkin said. “But the process of our game right now is almost where it needs to be, consistently in the last three games, and I feel like it’s building. We had chances (Tuesday), we had looks on the power play, we had zone time, we just didn’t get it by (Florida goalie Sergei) Bobrovsky, and it could have gone either way.”

Detroit coach Jeff Blashill was pleased with the defensive effort but is looking for more consistency on the offensive end. The Red Wings have scored just seven goals through the first four games of their trip, with four of those coming in Sunday’s victory. They have scored a lone goal in the three other games.

“We’re a good O-zone team,” Blashill said. “The stats say that; it looks like that when we’re in the O-zone. We’ve got to do a better job of managing the puck, so we don’t ground ourselves down. These are the types of games that we need to put ourselves in. We’ve got to keep finding ways to win these games, though.”

The Predators have lost three games in a row, including 6-1 home defeat Tuesday to the defending Stanley Cup champion Tampa Bay Lightning.

“You’ve just got to find a way to get it done,” Grimaldi said. “It (stinks) that we’re going through this right now, but hopefully this is going to make us stronger. Hopefully this is going to bind us together as a team. This is something that we all need to come together, grab the rope and get through this. It’s not 82 games, but there’s still a lot of season left. There’s no time to panic right now. We’ve got to stick together. I think that’s the biggest thing right now — let’s stay together as a team.”

The Predators have lost five of their past six games, although four of those have been to the Lightning. Nashville has scored just one goal in each of its past three games after a 6-5 overtime victory against Florida last Thursday.

“You’ve got to work hard, you’ve got to figure out the solutions of what they’re going to be, and you have to stay with understanding what it’s going to take to win and continuing to work toward that,” Predators coach John Hynes said. “That’s part of what we’re going through, and it’s something that we’ve got to get through. It’s not a time for excuses, it’s not a time to back off, it’s a time to be able to continue to work the way that we need to work and play the way we need to play to be more consistent and win.”