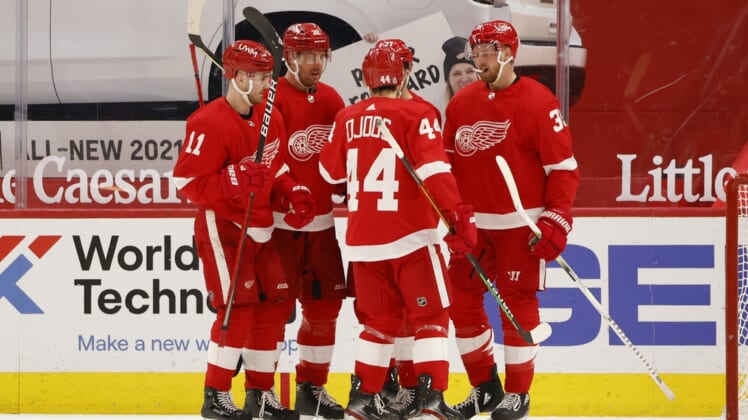 They’ll look to make it two straight at home over the Columbus Blue Jackets on Sunday afternoon.

Detroit snapped a three-game losing streak with a 3-1 victory on Saturday. The Red Wings had mustered just one goal during the slide, and that goal came in a 7-1 thrashing by the Nashville Predators on Thursday.

Red Wings coach Jeff Blashill said his team was “embarrassed” by the six-goal loss and came into practice on Friday eager to turn things around.

Goaltender Calvin Pickard sensed his teammates were ready for a strong showing.

“It started in practice yesterday,” he said. “We had a hard-nosed practice and coming to the rink today, it was all business. We wanted to bounce back.”

Pickard delivered a workman-like effort in his first start this season, making 21 saves while notching his first victory in more than two years. His last win came on Nov. 23, 2018, against the New York Rangers when he played for Philadelphia.

Pickard has served as the team’s third goaltender all season and made only two relief appearances prior to Saturday. He may have earned back-to-back starts.

“There’s days he’s been on the ice for upwards of three hours (during practice days),” Blashill said. “That’s the commitment you have to have and you can’t let it slip. You don’t know when your chance is coming. You have to be ready to jump through that window of opportunity when you get it.”

Detroit’s stagnant offense showed signs of life from the start, as it outshot Columbus 16-5 in the first period and grabbed a 2-0 lead. Adam Erne and Robby Fabbri scored 29 seconds apart.

Anthony Mantha scored in the third period. As with Fabbri’s goal, captain Dylan Larkin made the pass to set up the tally.

Fabbri has scored six goals over the last eight games. He now leads the team with 10 goals.

The first line of Larkin, Fabbri and Filip Zadina generated 13 shots on goal during the game.

“When they’re playing their best, they should be dangerous,” Blashill said. “All three of them were playing with some good jump tonight.”

“The hunger, what you need to do to have success, how you need to play … they just (showed it) before we could and we just didn’t have an answer for it,” Foligno said.

Columbus was starting a six-game road trip. With two games apiece against Central Division leader Tampa Bay, followed by a pair against Florida, the game on Sunday takes on added importance.

“Unacceptable, but what good is it for me to sit here and start saying all these things?” Foligno said. “We just have an opportunity (Sunday) to rectify that and learn from it and know that we gave one away today, which better (upset) some guys off in that room, because we don’t have any games to give away. We don’t have any cushion right now.”