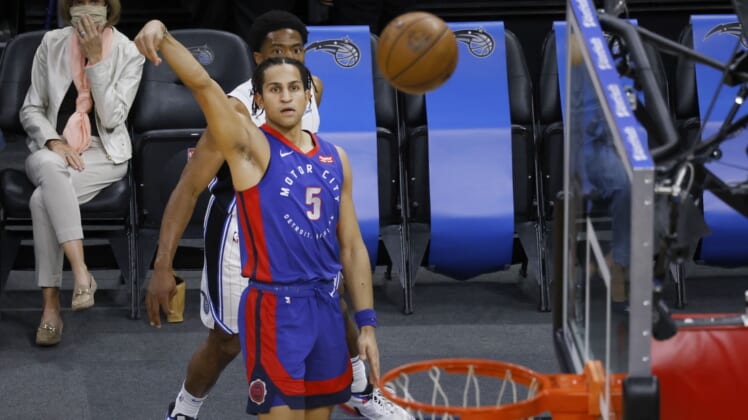 The Detroit Pistons will try to accomplish something they haven’t done in more than two years — win three consecutive games.

The last time they strung together more than two straight wins was March 2-10, 2019, when they reeled off five consecutive victories.

Detroit, which has undergone a complete roster overhaul since that season, hosts Chicago on Sunday. The Pistons defeated Toronto on Wednesday in their last home game, then traveled to Houston and handed the Rockets their 19th consecutive defeat on Friday.

Frank Jackson, who is playing on a two-way contract, led the Pistons with 23 points in the 113-100 victory. During March, five different players have led Detroit in scoring.

“We’ve got a group of young workers,” coach Dwane Casey said. “On any given night, one of the guys can step up and show it.”

Jackson, 22, appeared in 120 games with New Orleans the past two seasons. The Pelicans opted to make Jackson an unrestricted free agent during the offseason. He signed with Oklahoma City but was the last player cut in training camp before Detroit signed him.

“This is my fourth year in the league,” Jackson said. “I know what it takes to stay ready and stay locked in. It’s been nice to get on the court and get into a rhythm.”

With so many new faces and lineup changes, Casey has the team working on simple things like post passing and defensive switches during shootarounds and whenever they get to practice.

“We want to utilize every minute we can to work on some type of fundamental,” he said.

If there are any drills on closing out games, the Bulls need to concentrate on them. They’re at the height of frustration after squandering games to San Antonio on Wednesday and Denver on Friday.

The Spurs outscored them 39-19 in the fourth quarter to claim a seven-point victory. The Nuggets trailed them by 12 points with less than eight minutes remaining but forced overtime and downed them, 131-127.

“It’s a frustrating process for all of us because we play so hard and we play so good for long spurts and long periods of time,” forward Thaddeus Young said. “It’s like in the fourth quarter we start to go in self-destruct mode. I think we get into a frenzy and get a little frantic when guys start putting a little pressure on us, as opposed to just keeping our poise throughout the course of that fourth quarter. We’ve got to stop that.”

Denver guard Jamal Murray made a 3-pointer in the final second of regulation. The Nuggets then scored the first nine points in overtime.

“The amount of things we had to do to put them in position to win the game is mind boggling,” coach Billy Donovan said. “It’s a self-fulfilling prophesy. ‘Here we go again.’ We have to find a way to make the necessary plays and it wasn’t one play; it was a lot of plays. We’ve got to be able to make winning plays at winning time.”

Chicago made enough winning plays to defeat the Pistons, 105-102, on Feb. 17. Zach LaVine poured in 37 points and the Bulls outscored Detroit 62-41 in the second half. Detroit wasted Jerami Grant’s career-high 43 points.