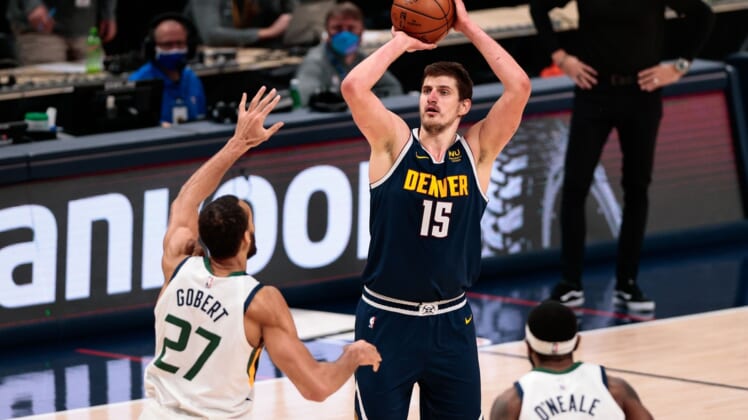 Friday night in San Antonio, the Denver Nuggets came within a quarter of sweeping a five-game road trip and extending their winning streak to six games. It was an impressive run, but not as impressive as what the Utah Jazz have been doing lately.

Utah has reeled off 11 straight wins, the past two without Donovan Mitchell and Derrick Favors, and at 15-4 own the best record in the NBA. The Jazz will put that streak on the line when they visit the Nuggets for an early afternoon matchup on Sunday.

Mitchell (concussion protocol) and Favors (lower back soreness) haven’t played since last Tuesday but traveled to Denver on Friday while their teammates were completing a two-game home sweep of the Dallas Mavericks. Their status for Sunday is unknown.

If one or both can’t play, it will be tougher to beat a Nuggets team that has found some footing over the past few weeks, but Utah has played well without them, too. Different players have stepped up in their absence, giving the Jazz a boost against the Mavericks.

“It does bode well for us when we know that guys like Don can miss a few games and we can still win, and especially with Fav out,” Mike Conley said after Friday’s 120-101 victory. “It’s tough to lose those guys, not have them, but for us to come out and play against a good team, and not only just a good team but two times in a row, and come out with wins, just says a lot about our team and our resiliency.”

Denver has found some of that resiliency after starting the season with four losses in the first five games. The Nuggets won 10 of their next 13 before falling 119-109 to the Spurs on Friday night. Nikola Jokic continues to play at an MVP level, notching his 19th straight double-double to start the year.

He was averaging a triple-double for the season but his assists totals have fallen off. Over the past six games Jokic is averaging just 5.3 per game and is now third in the league at 8.7 per game.

The good news for Denver is Gary Harris seems to have broken out of an extended offensive slump. Harris is known for his defense but the Nuggets need his scoring, too. In the past nine games, he has hit 46.5 percent from 3-point range.

“The one thing that I love about Gary Harris is that every night, he doesn’t complain,” coach Michael Malone said. “He embraces the challenge of guarding the other team’s best weapon. And that’s every single game that we play.”

If Mitchell doesn’t play Sunday, it will make Harris’ day a little easier on the defensive end and give Denver a chance to even up the season series. Utah won the first matchup, 109-105, in Denver on Jan. 17. It was a continuation of the budding rivalry that started in the first round of the postseason near Orlando last summer when the Nuggets rallied from 3-1 down in the series and won Game 7 to advance in the Western Conference playoffs.