The Boston Bruins will aim to continue their torrid stretch on Monday when they host the New York Islanders in Game 2 of their second-round series.

The Bruins posted their fifth straight win overall with a 5-2 victory in the series opener on Saturday. The Bruins’ triumph came after being idle since thier first-round series-clinching 3-1 win over the Washington Capitals on Sunday.

David Pastrnak, 25, recorded his second career playoff hat trick on Saturday. Pastrnak, who netted his first in Game 2 of an Eastern Conference first-round series against Toronto in 2018, trails only Hall of Famers Phil Esposito (four), Cam Neely (three) and Johnny Bucyk (three) for the most in franchise history.

Pastrnak has five goals and seven points over his past three contests. He collected seven points (two goals, five assists) in seven meetings with the Islanders in the regular season.

“Good for us,” Bruins coach Bruce Cassidy said of Pastrnak’s success. “When goal scorers get hot, that’s what happens a lot of the time, they’re in the right spot. Obviously, you have to be when you’re one of those gifted guys where you create space to find your own spot. Good for Pasta, it was his night and his line’s night. Worked out very well for us and for him.”

As for the other members of the Perfection Line, captain Patrice Bergeron had two assists and registered a game-high eight shots on goal and Brad Marchand also had an assist on Saturday. 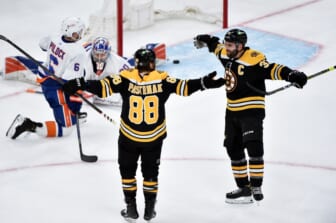 “On this line, there’s probably three great players at different points in their careers. That’s what makes that line so good,” Islanders coach Barry Trotz said. “And (Saturday) night, they were on. And they were very difficult to stop. To me, they were the difference in the game.”

Tuukka Rask yielded two goals on 20 shots on Saturday to improve to 5-1-0 with a 1.84 goals-against average and .937 save percentage in the playoffs. The former Vezina Trophy recipient is in line to make his 100th career postseason appearance should he get the nod on Monday. 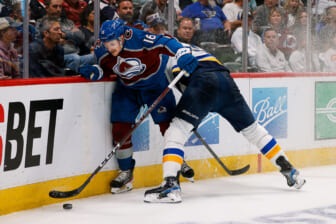 New York’s Anthony Beauvillier extended his goal-scoring streak to three games and point streak to five (four goals, three assists) when he tallied on the power play midway into the first period on Saturday.

While Trotz has been pleased with Beauvillier’s play, he made a pointed comment at other members of the club on Sunday.

“If you get on the ice, it doesn’t matter who you play with, you’ve got to raise your game,” Trotz said. “We’ve got some guys that didn’t raise their game (in Game 1).”

The Islanders will need to contain Boston’s potent power play. The Bruins converted on both opportunities in Game 1 to improve to 7-for-21 (33.3 percent) for the playoffs.

Boston’s Craig Smith’s availability for Game 2 is in question after exiting the series opener with a lower-body injury. Defenseman Kevan Miller, however, will miss his third straight game with an undisclosed ailment.

Trotz said there will be no changes to his personnel for Game 2.