PREVIEW: Dallas Mavericks, Rockets finally get to tip off in Houston 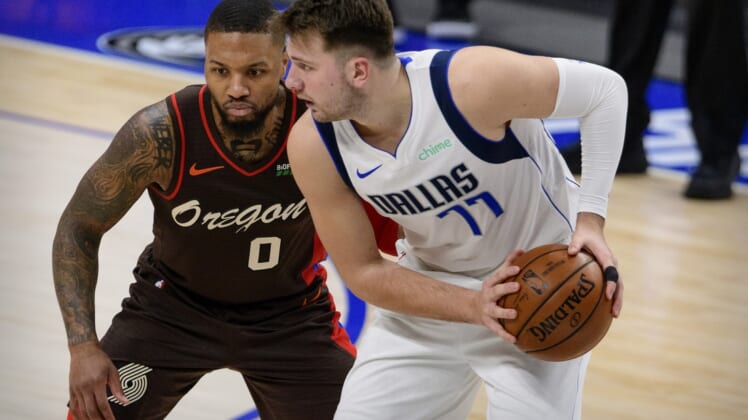 Amid the cold-weather crisis gripping the state, the Texas-based Dallas Mavericks and Houston Rockets meet Friday in Houston.

“The important thing is to work through all of it — always hoping for the best, but being ready for more surprises,” Dallas coach Rick Carlisle said, per Mavs.com. “We all of the sudden have had two ultra-extraordinary situations with a worldwide pandemic and then an unexpected freeze.”

Wednesday’s postponement gave the Mavericks an unanticipated, five-day layoff between games. In their last outing, a 121-118 loss to Portland on Feb. 14, Luka Doncic scored 44 points but missed an open look at the would-be, game-tying 3-pointer in the waning seconds.

“If he had that shot nine more times, I think he’d make it nine times in a row,” Carlisle said in his postgame press conference.

In two previous matchups with Houston this season, Doncic scored and dished out more assists (33 points, 11 assists) than his average in a win Jan. 4 and was held below those marks in a loss (26 and eight).

The Rockets will aim to slow Doncic down on Friday, while also seeking to snap a seven-game skid.

The Texas weather and energy crisis have thus far not affected Houston’s schedule. The Rockets finished a three-game, East Coast road swing on Wednesday with a 118-113 loss at Philadelphia.

Houston made Wednesday’s contest competitive down the stretch, despite giving up 69 first-half points and trailing by 26 points at intermission.

“The way we were playing in the first half was unacceptable — unfair to themselves, unfair to everybody — and they had a decision to make as far as our professionalism, our overall lackadaisical play,” Rockets coach Stephen Silas said in his postgame press conference. “Incredibly disappointing in the first half, walking around, not defending, not doing the things we should do. I challenged them to be better and they were.”

During its current losing streak, Houston has allowed 118.7 points per game. In three of the seven losses, the Rockets failed to score 100 points.

Assorted absences from the lineup have contributed to Houston’s recent struggles. Christian Wood, who is averaging 22 points and 10.2 rebounds per game, has been sidelined for the entire losing streak due to an ankle injury.

John Wall has picked up much of the scoring load in recent games, posting at least 22 points in six of the last seven games he’s been available. He scored 26, 29 and 28 points respectively in Houston’s last three outings.