PREVIEW: Arizona Coyotes aim to even series with Blues at 3 wins each 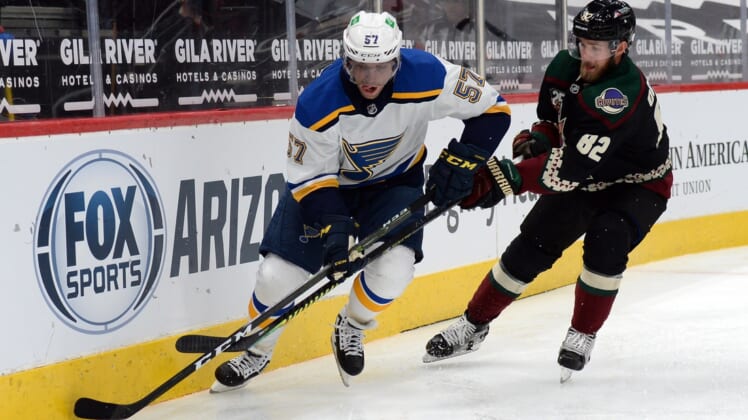 The St. Louis Blues will look to turn the tables on the Arizona Coyotes when the teams continue their unusual series Saturday night in Glendale, Ariz.

The Coyotes and Blues are playing each other seven consecutive times due to COVID-19 postponements elsewhere in the NHL. Arizona won three of the four games played in St. Louis, including one in a shootout.

The Blues responded with a 4-1 road victory Friday night at Gila River Arena.

“It’s good on the boys, we needed to grind one out here,” said Blues defenseman Justin Faulk, who had two goals and an assist in the victory. “Obviously Arizona had our number there at home. Coming in here with three more against them, it’s a weird scenario, but the boys needed to put one together here.”

The Friday contest was a tight 2-1 affair until the Blues scored two empty-net goals in the final two minutes.

“It was good to see us close out the game there in regular time,” said St. Louis goaltender Jordan Binnington, who made 24 saves. “We could feel it coming. We kept working, stayed patient, stuck with our game. It was a hard-fought game, it was tight on both sides. It’s a good win by us.”

Both teams rang shots off the post earlier in the game, and both had goals erased by replay review. Coyotes forward Conor Garland lost a go-ahead goal in the second period when the Blues successfully challenged the play for being offside.

“It was a hard-fought game,” Arizona coach Rick Tocchet said. “It’s too bad about the offside there. I’m not too unhappy.”

The Saturday game will be the second contest of a critical 11-game homestand for the Coyotes.

“We’ve got to make sure that our energy level is really high,” Tocchet said. “We’ve been playing well in this building the last year, which is nice, but we’ve got to make sure we manage our rest. We can’t get stale, we can’t just go, ‘Oh, we’re 10 games at home, we can relax. The intensity has to be there, almost like a road mentality.”

The Coyotes got captain Oliver Ekman-Larsson back on the blue line Friday after a 10-game absence caused by a lower-body injury. Forward Christian Fischer also came off injured reserve after missing four games with an undisclosed ailment.

Since Binnington started in goal Friday, the Blues figure to give rookie Ville Husso (1-2, 3.69 goals-against average) another start. He lost to the Coyotes 3-1 on Feb. 6.

The Blues may be without forward Oskar Sundqvist, who had to be helped off the ice late in the game after crashing awkwardly into the boards.

The teams will conclude the lengthy series Monday afternoon.

“It’s a tight series, and we’ve got two more here to finish up,” Binnington said.