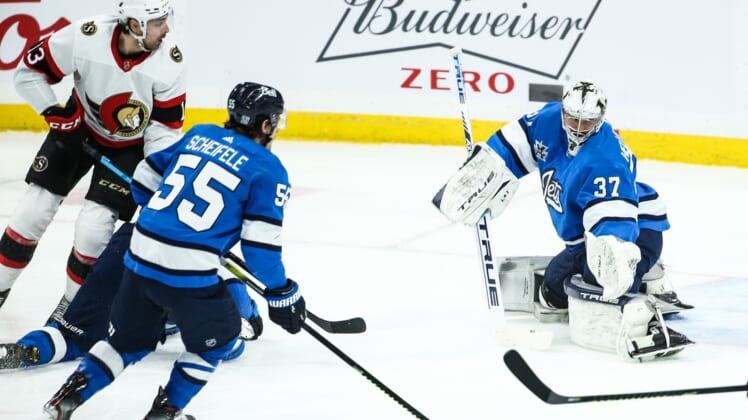 The Edmonton Oilers are getting contributions from all over the ice, and they aim to keep the teamwide effort going when they host the Winnipeg Jets on Monday.

The Oilers are 6-1-0 over their last seven games, including a current three-game win streak. In a departure from the high-scoring games that have often defined the Oilers, their three-game streak has been marked by strong goaltending and defense.

Edmonton has limited opponents to just three goals over the last three games. Goalie Mike Smith made 38 saves in a 3-0 road shutout of the Montreal Canadiens on Thursday.

Connor McDavid and Leon Draisaitl have each contributed one assist over Edmonton’s last two games, but the team has been getting help from all over the roster.

“Guys that are on the third or fourth line, they’re not going in thinking they’re not going to score,” Khaira said. “They’re trying to produce as well and … take some pressure off the top guys that produce day-in and day-out. So when we chip in, I think it’s big for the team from top to bottom.”

Smith is expected to start Monday, and his return from injury has brought an immediate boost to Edmonton’s goaltending. Smith has allowed just one goal on 66 shots faced (.985 save percentage) in his two starts this season.

Connor Hellebuyck will likely be back in net for Winnipeg on Monday. Hellebuyck has started 11 of the Jets’ 14 games but is showing no sign of wear, with a 2.36 goals-against average and .921 save percentage this season.

Hellebuyck is undoubtedly looking to bounce back after a tough ending to Winnipeg’s 2-1 loss to the Ottawa Senators on Saturday. Ottawa’s Brady Tkachuk scored with just nine seconds remaining on a play started by a Jets turnover in their own end, as Hellebuyck made an awkward attempt at playing the puck and no defenseman was back to take the clearance.

Jets coach Paul Maurice described it as a “a gaffe, a miscommunication on a simple play,” and felt his team’s larger issue was a lack of scoring spark.

“We had some offense die, I felt, during the game on some simple plays that we could have made to keep the momentum,” Maurice said. “We had some good (offensive zone) shifts that died on the handling of puck at times.”

Maurice shuffled lines during the game, reuniting the trios of Mark Scheifele, Kyle Connor and Blake Wheeler, and Paul Stastny, Nikolaj Ehlers and Andrew Copp. It remains to be seen if these line combinations will remain intact for Monday, or if Saturday’s usage was a byproduct of the Jets only having 11 forwards available.

Pierre-Luc Dubois is questionable for Monday after being scratched from Saturday’s lineup due to a lower-body injury.

For the Oilers, Jesse Puljujarvi and Mikko Koskinen (COVID-19 protocols) are expected to be available after missing Thursday’s game.

Scheifele has eight points (three goals, five assists) over the course of a six-game points streak.

The Jets and Oilers split two previous meetings this season. The two clubs play again in Edmonton on Wednesday.