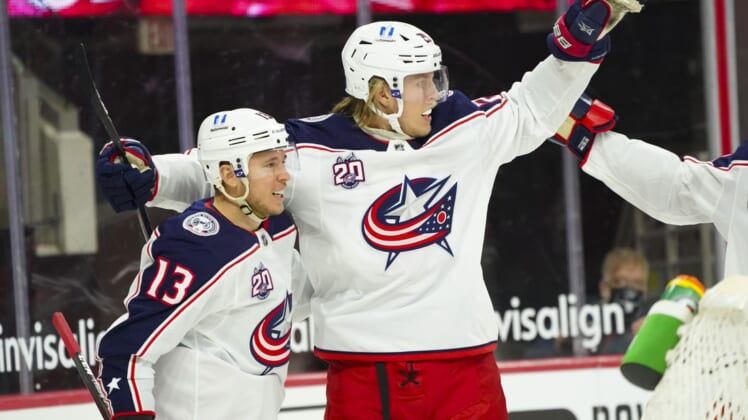 The Columbus Blue Jackets have had plenty of time to stew after being taken to task in their last game.

The Blue Jackets bid to snap a two-game winless skid (0-1-1) on Thursday when they open a four-game homestand against the Nashville Predators.

“It’s just not the way we’re known to play,” NHL First Star of the Week Cam Atkinson said after Columbus yielded six unanswered goals in a 7-3 setback to the Carolina Hurricanes on Monday.

“It’s just kind of embarrassing on our part. We have to be way better if we want to win in this league.”

Atkinson scored his team-leading sixth goal of the season just 26 seconds into Monday’s contest. The tally extended his respective goal and point streaks to four games (four goals, four assists). However, Atkinson was held off the scoresheet and totaled a minus-4 rating in both losses to Nashville this season.

Boone Jenner scored and set up a goal on Monday and had the lone tally in the Blue Jackets’ 3-1 setback to the Predators in the season opener on Jan. 14.

Defenseman Seth Jones saw his career high-tying six-game point streak halted on Monday. However, it’s the play of the team in front of his own goaltender that is troubling. Columbus is surrendering a staggering 3.53 goals per game, including at least six tallies in three of its last seven games.

“(Defensive) zone coverage hasn’t been a hot spot for us,” Jones said. “We’re giving up some pretty easy goals, easy chances. That’s not going to lead to winning hockey.”

Nashville likely is itching to get back on the ice after seeing its two-game series against the Stars postponed due to power outages and severe weather in the Dallas area.

The Predators have lost nine of the 13 games since outscoring the Blue Jackets by an 8-3 margin over two games to start the season. Filip Forsberg scored in both contests against Columbus, setting the tone on a season in which he leads Nashville in goals (seven), assists (seven) and points (14).

Forsberg’s performance aside, there have been a lot of sour notes in Music City. As a point of reference, no other Predators’ player outside of the Swede has more than three goals this season, and Nashville’s 2.33 goals per game is better than just two other NHL clubs (Detroit, Anaheim) entering play on Wednesday.

“Our play right now is unacceptable,” defenseman Ryan Ellis said. “The results aren’t acceptable. It needs to change. It’s not like we have a lot of time. The good thing is every game is a division game, and it gives us an opportunity to catch up, but we’re digging ourselves a hole, and it’s only due to ourselves. No one else’s fault but the guys in the locker room.”

Nashville general manager David Poile said Ryan Johansen (upper body), who was not expected to play in either scheduled game versus Dallas, is questionable for the upcoming pair of contests against his former team.