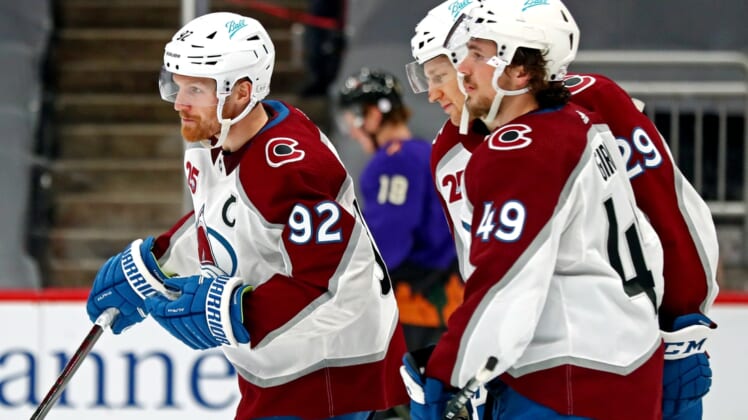 The Colorado Avalanche bounced back from a disappointing loss with a dominating win on Wednesday night, but it may have come at a cost.

Nathan MacKinnon suffered an apparent head injury when he took a hit from Joachim Blichfeld in the third period of a 4-0 win at San Jose, and the hope is it isn’t a serious injury as the Avalanche prepare to host the Anaheim Ducks on Friday night.

Colorado said it would not have an update on MacKinnon’s condition until Friday, but after Wednesday’s game coach Jared Bednar was optimistic.

“I saw him coming off the ice,” said Bednar. “He was in the hallway; he seems to be doing good. I think that we get lucky on it. Hopefully, he’s feeling good and everything (Thursday) but as of right now he seems to be fine.”

The Avalanche have been dealing with multiple injuries during the season and avoiding a prolonged absence of their best player would be ideal. Colorado’s defensive corps has been hit particularly hard, with three of its top six missing a pair games in San Jose. Cale Makar and Bowen Byram were out with upper-body injuries and Makar may return against the Anaheim.

A continuing trend from the win over the Sharks was the scoring output of Gabriel Landeskog. He had a goal and three assists and now has a goal in three straight games after going 10 games without one.

“You start going five, six games and it gets a little bit mental,” he said Wednesday night. “It was just nice to end that streak and kind of turn the page.”

The Ducks are on a forgettable streak heading into games against the Avalanche on consecutive nights. Anaheim hasn’t won a game since beating Vegas 1-0 on Feb. 11, going 0-6-2 in that span including a 3-2 loss at St. Louis on Wednesday night.

Six of those games have been one-goal losses.

“The frustrating things are the one-goal games,” coach Dallas Eakins said. “We’re right there and knocking on the door and have to find a way to keep one or two out of our net.”

Even with the losing streak, the Ducks were happy with their penalty-killing unit, which was ranked seventh before giving up three power-play goals to the Blues on Wednesday night, which only added to the misery.

“Of course, it’s frustrating,” Jani Hakanpaa said after Wednesday night’s game. “You lose a lot of games in a row, you feel like you’re in the games, you’re having a lot of good stretches out there and somehow you can’t come out on the winning side of things. It is tough, I’m not going to lie. We’ve got to stick with what works and stick together. We’ve got to just trust the process and keep grinding.”

Colorado was frustrated enough with a recent 2-3-0 stretch that the team held a meeting Wednesday morning before facing the Sharks.

“The biggest thing is just consistency,” Brandon Saad said, according to Colorado Hockey Now. “(It’s) knowing how good we can be when we show up to play.”