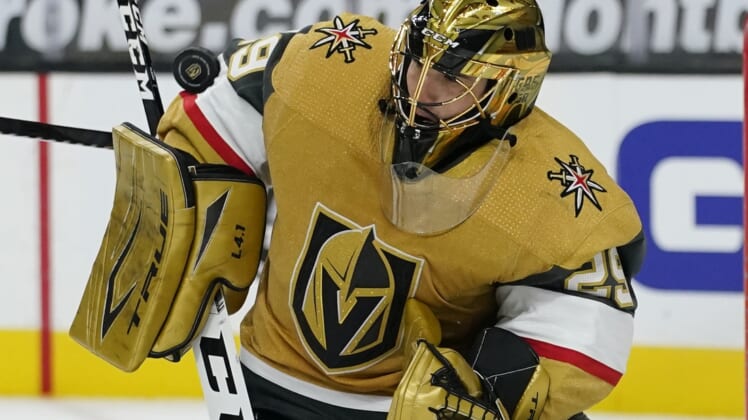 All things considered, the Colorado Avalanche probably couldn’t have asked for a tougher opponent to play following a 12-day COVID-19 break than the Vegas Golden Knights and red-hot goaltender Marc-Andre Fleury … and it showed Sunday in a 1-0 defeat. Now the Avalanche hope to respond for a more positive result Tuesday night, also in Las Vegas.

The Avalanche, still missing seven players including forwards Gabe Landeskog and Tyson Jost as well as three of their top six defensemen including Cale Makar (upper body) and Samuel Girard (COVID protocol), were shut out for the first time this season as Fleury, named the NHL’s No. 2 Star of the Week on Monday, turned away 30 shots.

Colorado coach Jared Bednar said there’s a chance Makar, tied for fourth in the NHL among defensemen with 12 points, could be back for Tuesday’s round 2 of a four-game set between the two West Division heavyweights.

Landeskog, the Avalanche captain who has scored 201 career goals and 468 points, said during a Monday conference call he will miss Tuesday’s contest because of COVID protocol but will return to practice on Friday in preparation for Saturday afternoon’s NHL Outdoors at Lake Tahoe contest with the Golden Knights. The teams then play again Monday in Denver.

Despite the loss in Sunday’s series opener, Bednar was pleased with the way his team competed in its first game back from the long layoff, especially defensively where 19-year-old Bo Byram excelled during a career-high 23:07 time on ice.

“I thought our young guys on the back end did a good job,” Bednar said. “We were missing our legs a little bit. You could tell. We didn’t have the extra pop in our legs that we needed to create a few more chances and the last little bit of execution.

“I think our minds were in the right place and we were trying to do the right things: but we just didn’t execute the way we’re capable of, you know, the last 10 percent that we needed to create scoring chances. But the mindset was right, the attitude was right, the work was there. We’re just going to have to be better to beat these guys.”

Max Pacioretty whipped a wrist shot from the right circle past Philipp Grubauer early in the second period for the only goal in Sunday’s tight-checking contest as Vegas improved to 8-1-1 at T-Mobile Arena with its fifth win in six games.

“It was a playoff-type feel to that game,” said Golden Knights coach Peter DeBoer. “A 1-0 game, goaltending great at both ends. It was a great hockey game.”

With expected No. 1 Robin Lehner out with an upper body injury (he’s played in only five games following offseason shoulder surgery), Fleury made his fourth start in six days and improved to 7-1-0 for the season with the only loss to John Gibson and the Anaheim Ducks, 1-0.

“He was fantastic,” DeBoer said. “He was fantastic (Saturday) in San Jose (a 3-1 win) too. You look at the schedule, and with Robin going down, we’ve asked him to play a bunch of games in a row here. And he’s had the energy to do it, and not only do it, but do it at a real high level. He’s been out best player through this stretch.”

DeBoer said Lehner “was improving” but didn’t give a timetable on his return. “We’ve got to get (Fleury) some rest and get him ready for Tuesday,” he said.