The visitor-dominated playoff series between the Dallas Mavericks and Los Angeles Clippers continues with Game 5 in California on Wednesday night when the Western Conference clubs seek to move one win away from advancing to the second round.

The Mavericks will be seeking a third straight win in Los Angeles, while the Clippers go after a third consecutive victory overall, in a 2-2 series that’s already been unlike any other in each team’s postseason history.

Fifth-seeded Dallas got the jump on its fourth-seeded opponent with 113-103 and 127-121 wins in its previous two visits to Los Angeles.

It was the first time since 2011 that the Mavericks took a 2-0 lead in a playoff series, and just the second time they’d gone up 2-0 on the road. 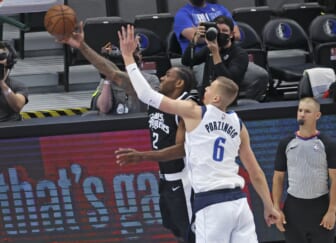 That only previous 2-0 start on the road also occurred in Los Angeles, when the Mavericks stunned the Lakers to begin their Western semifinal series in 2011. But on that occasion, Dallas then took care of business at home, completing a four-game sweep.

That possibility went out the window in Game 3 against the Clippers, who went to Dallas and not only got back in the series with a 118-108 win, but also went on to square the best-of-seven matchup with a 106-81 shellacking in Game 4 on Sunday.

The only other time in their West Coast history that the Clippers had fallen behind 2-0 in a playoff series, they went on to get swept by San Antonio in 2012.

Neither team is claiming an advantage at this point.

“It’s just 2-2. We are right where we’re supposed to be,” Clippers veteran Nicolas Batum observed. “So now, (we’ve) got to go home and take care of the home court and take care of this game or we can put ourselves in a bad situation if we don’t do the job.”

After a sluggish start to the series — Game 1 for Kawhi Leonard, Games 1-2 for Paul George — the Clippers got their big two rolling in Dallas.

Dallas standout Luka Doncic did everything he could to give the Mavericks a shot in Game 3, pouring in 44 points, but struggled through neck pain and managed just 19 points — 12 fewer than any of the previous three games — on 9-for-24 shooting on Sunday.

The two days off came at a good time for the Mavericks, who hope to see the Doncic from earlier games in Los Angeles in Game 5.

“He’s in pain,” Mavericks coach Rick Carlisle assured in the immediate aftermath of Sunday’s loss. “It appeared to me that he couldn’t turn left. He couldn’t look to his left.”

The Mavericks’ Tim Hardaway Jr. and Clippers’ Marcus Morris Sr. have been wild cards in the series.

Meanwhile, Morris totaled just 13 points on 5-for-17 shooting in the Clippers’ two opening losses, but then chipped in with 12.0 points per game on 9-for-14 in Dallas.