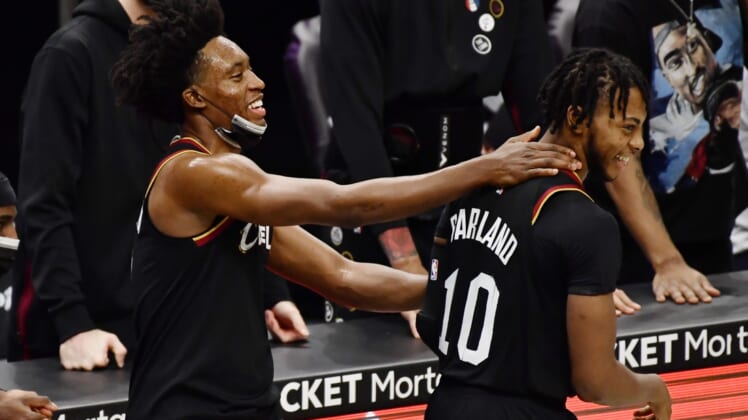 Bickerstaff, in fact, is confident the Cavaliers will bounce back from their third loss in four games on Sunday night when they open a home-and-home series against the Minnesota Timberwolves in Minneapolis. The teams will reconvene in Cleveland the following night to open the Cavaliers’ four-game homestand.

“Not at all,” Bickerstaff said, when asked if Friday’s 102-81 setback at the New York Knicks was a sizable step back in terms of the team’s growth.

“We’ll be better on Sunday. We’ve got to do a much better job of passing the basketball to the open man. It’s a simple thing. It’s a simple adjustment to be made. It’s an easy thing for us to fix.”

Darius Garland scored 16 of his season-high 24 points after intermission on Friday. He highlighted the night with 4-of-6 shooting from 3-point range.

“We definitely get ahead of ourselves sometimes,” the 21-year-old Garland said. “But we’re growing into a really good team. We just have to lock in on both ends and play with each other. That’s the only way we’re gonna win games, when all five on the floor just play with each other.”

Sexton, however, made just 6 of 18 shots from the floor on Friday and misfired on all four of his 3-point attempts.

Andre Drummond increased his league-leading rebounding average to 14.7 after grabbing 15 boards on Friday. He mustered a season-low four points on 2-of-7 shooting versus the Knicks, however.

In addition to a sputtering offense, Cleveland also has endured significant road woes this season. Boston breezed to a 141-103 win over the Cavaliers last Sunday before New York’s runaway victory dropped the club to 3-6 away from Quicken Loans Arena.

While Cleveland has struggled on the road, Minnesota has tumbled head over heels regardless of venue. The Timberwolves have dropped three in a row overall and 14 of their last 16 games since winning the first two contests of the season.

Russell (20.1 points per game) and Beasley (20.0) are paving the way for the Timberwolves in the absence of two-time All-Star Karl-Anthony Towns, who has missed seven straight games due to COVID-19 protocols.

Injuries and absences forced Minnesota to use its 10th different starting lineup in 18 games on Friday.

Top overall pick Anthony Edwards was inserted into the lineup and scored 15 points on Friday, two days after erupting for 25 with five 3-pointers in a 123-111 loss at the Golden State Warriors.