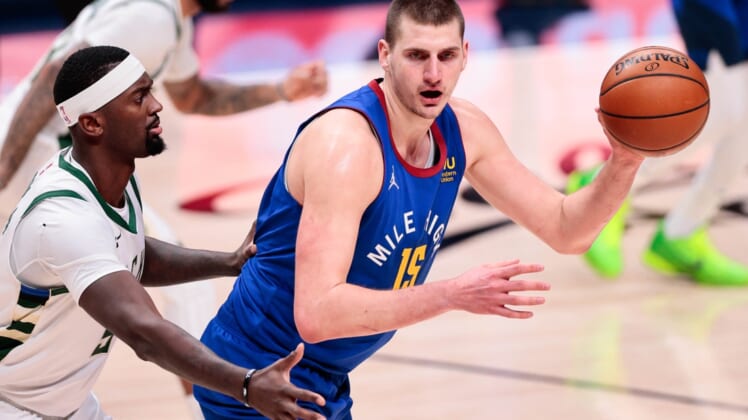 It might take both centers to stop Nikola Jokic when Cleveland plays at the Denver Nuggets on Wednesday night.

Jarrett Allen, acquired in the three-team trade from Brooklyn, played alongside Andre Drummond, giving the Cavaliers an imposing frontcourt. Allen is 6-foot-11 and Drummond is 6-10 but seems to play much bigger, which might cause problems for Jokic.

Cleveland is making the adjustment in part to shore up the defensive void left by Nance’s injury.

“It’s something we’ve been working on,” coach J.B. Bickerstaff said before the Cavaliers’ loss at Phoenix on Monday night. “Understanding how the two of them can play well together comes down to spacing and how they space for one another, but how they space for their teammates as well to create driving lanes and allow us to get into the paint and make plays from the paint as well.”

If Cleveland is going to end a four-game skid Wednesday night, it will take a better defensive effort. The Cavaliers have allowed an average of 121.7 points during their losing streak while averaging just 104 points.

“We have to get better defensively,” Bickerstaff said. “I think we’ve taken a step back with our defense. We’ve got to get back to our foundation of our defensive system and get back to scrapping and clawing a little bit more as well.”

The Nuggets are scuffling, too, having lost their last three, including a 125-112 setback at home to the Milwaukee Bucks on Monday night. Jamal Murray returned after missing a game with a sore knee and had just 11 points on 4-of-17 shooting.

“Will Barton said I just need to get back in a rhythm, first game back, and I’m like, ‘Bro, I’ve been playing basketball for too long to go 4-for-17,’ getting all the good looks I want,” Murray said. “I just have to be better. I can be way better. I’m not playing at the level I need to right now.”

Jokic can’t play much better than he has this season — and over the past two games. He scored a career-high 50 points at Sacramento on Saturday and then had 35 points and 12 rebounds against Milwaukee.

He is averaging 36 points and 10.2 rebounds over the last five games, but it hasn’t made a difference in Denver’s current three-game losing streak. Third quarters have been a problem in the skid; the Nuggets have been outscored 105-72 in the period.

“We still find ourselves trying to figure out how to be a team that plays a lot better in the second half,” Denver coach Michael Malone said after Monday’s game. “We’ve lost three in a row because we haven’t defended anybody.”

“We’re not getting back, we’re not talking enough, we’re just not being good enough,” he said. “We do it for stints, we do it for parts of the game, but we’re not withstanding for the lengths that we need to.”