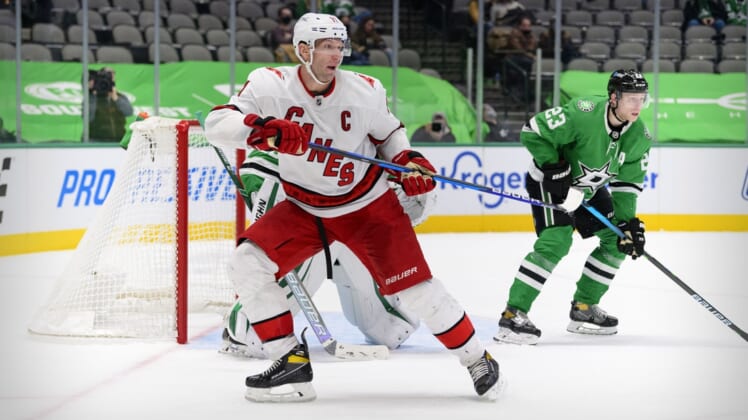 The Chicago Blackhawks seek their fourth win in a row when they visit the Carolina Hurricanes on Friday night to open a back-to-back set in Raleigh, N.C.

Chicago is coming off two straight victories over the Detroit Red Wings, which followed a 3-2 overtime win vs. the Columbus Blue Jackets last Saturday. The Blackhawks are 7-1-1 in their last nine games — a terrific stretch that few outsiders would have predicted before the start of the season.

Lankinen, a rookie goaltender from Finland, has been a huge part of the Blackhawks’ identity. He started the season behind Malcolm Subban and Collin Delia on the depth chart, but he quickly seized the starting job with his consistent performances.

Through the first 12 starts of his career, Lankinen is 7-2-3 with a 2.29 goals-against average and a .931 save percentage. He has limited opposing teams to two goals or fewer in eight of those 12 starts.

For all of Chicago’s success, Carolina has played even better.

The Hurricanes have earned at least one point in 11 of 14 games to start the season. They are coming off a 4-3 overtime loss against the Florida Panthers on Wednesday, but the Hurricanes extended their points streak to four games.

Carolina has only three regulation-time losses, with one of those coming against Chicago on Feb. 4. That also was part of a back-to-back set, with the Hurricanes winning 4-3 in the shootout round on Feb. 2 before falling short 6-4 the following night.

Hurricanes coach Rod Brind’Amour is hoping to see his team play better Friday. He said Wednesday’s overtime loss against Florida was too sloppy.

“We just didn’t get to work, and (we) let the other team back in, and they’ve got too much talent to do that,” Brind’Amour said. “It’s the NHL. You’re going to get what we got when you’re not ready to play every shift. It’s 60 minutes. There’s no way around it. It’s not on the goalie.”

The goaltender was Alex Nedeljkovic, who dropped to 1-1-1 with a 3.23 GAA and .886 save percentage in only his third start of the season. Nedeljkovic has received a few starts while Petr Mrazek is out recovering from thumb surgery.