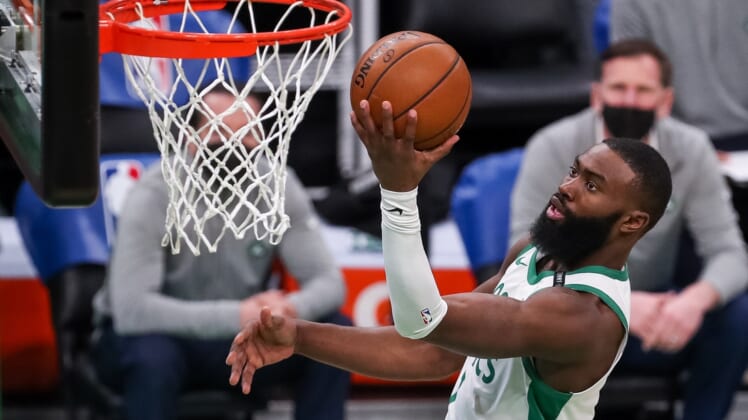 A four-game homestand before the All-Star break gave the Boston Celtics the perfect opportunity to put a month-long funk behind them and push their record back above .500.

Three games in, they’ve done just that. The Celtics will look to continue their winning ways as they host the depleted Toronto Raptors on Thursday night.

Boston has won three straight for the first time since early January, defeating the Indiana Pacers, Washington Wizards and the Los Angeles Clippers over the past week. The most recent of those victories — 117-112 against the Kawhi Leonard-less Clippers on Tuesday — pushed Boston’s record to 18-17 after a stretch of 11 losses in 16 games.

“It’s always more fun winning than losing, but I feel like it’s really just us getting close as a team. That’s where the fun is coming,” Boston big man Robert Williams III said.

Fun has not been a word associated with the Raptors in recent days. The team returned from two games postponed due to COVID-19 protocols to get stomped 129-105 Wednesday by a Detroit Pistons club that sports the worst record in the Eastern Conference.

Toronto was without three of its top five scorers — Pascal Siakam, Fred VanVleet and OG Anunoby — in addition to head coach Nick Nurse and most of his staff.

“No excuses,” said assistant coach Sergio Scariolo, who is leading the team through the rough patch. “We had enough players and coaches to have played a better game than this one.”

The loss slipped the Raptors’ record back below .500 (17-18) after a stretch of five wins in seven games before the postponements. The players that missed Wednesday’s contest aren’t expected to be available Thursday.

The meeting will be the third this season between clubs that faced off in last year’s Eastern Conference semifinals. Boston has won the first two.

During its current streak, the Celtics have looked a lot more like a team capable of a deep postseason run. The key has been improved defense, on display when they outscored the Clippers 29-23 during the fourth quarter Tuesday for a comeback victory.

“We still have so much to improve, but defensively we’ve been a lot better,” said Jaylen Brown, who scored 18 points in his return from one game missed due to left knee soreness. “I think during stretches, we’ve taken our foot off the gas and blown a 24-point lead, et cetera. You’ve got to continue to guard in this league for the entire game.”

Also key to the resurgence has been point guard Kemba Walker, who has scored at least 25 points in two of his past three contests.

“It’s tough. I really could have shot a lot more,” Lowry said. “I shot 11 times, but I wanted to play the right way to try to keep everybody involved, keep everybody going.”

The Raptors trailed by as much as 26 in the lopsided defeat.