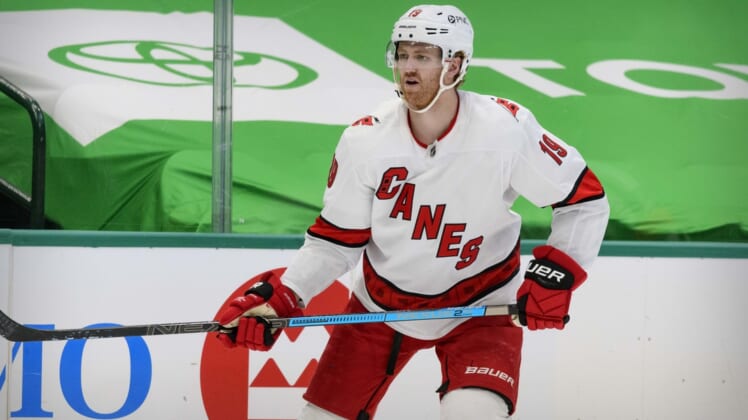 After falling just short of a franchise record win streak, the Carolina Hurricanes will look to begin a new unbeaten run when they host the Columbus Blue Jackets on Thursday in Raleigh, N.C.

The Hurricanes were on an 8-0-0 streak heading into Tuesday’s game with the Detroit Red Wings, and another victory would have tied their team record of nine consecutive wins. However, the last-place Wings acted as spoilers by recording a 4-2 upset win.

Carolina forward Martin Necas didn’t feel his team felt any unusual pressure in going for the record, noting, “I think it’s way worse if you’re on a losing streak; then you’re under pressure; you need to win. Of course, you want to win every game, but it’s the best league in the world. You cannot win every game.”

An early special teams breakdown contributed to the loss, as Detroit’s Adam Erne scored two power-play goals within the first 13 minutes. The Hurricanes’ penalty killers were a perfect 13-for-13 on opponents’ power-play chances over their previous four games.

Carolina’s penalty-kill unit has an opportunity to get back on track against a struggling Blue Jackets power play. Since scoring a season-high three power-play goals in a 6-5 shootout loss to the Chicago Blackhawks on Feb. 23, the Jackets are only 2-for-25 with the extra attacker over their last 10 games.

Thursday’s game begins a four-game series between the Hurricanes and Blue Jackets that follows a playoff-like structure. The two teams play in Raleigh on Thursday and Saturday before moving to Columbus on March 22 and 25.

The Hurricanes are 2-1-0 in three previous games with Columbus this season.

The Blue Jackets head into the four-game set after a rare break in the schedule. Following Sunday’s 2-1 shootout loss to the Dallas Stars, the Jackets had three full days between games for the first time all season.

Coach John Tortorella took advantage of the hiatus by giving players a full off-day on Monday and an optional session Tuesday before returning to a full practice on Wednesday.

“We’ve played a lot of hockey,” Tortorella said. “I have played players that I never thought I’d be giving the amount of minutes that I’m giving them, (and) overplayed some guys.”

Columbus saw even more ice time when each of its last three games went beyond regulation time. The Jackets sandwiched a 4-3 overtime win over the Stars between a 5-4 overtime loss to the Florida Panthers last Thursday and Sunday’s shootout loss to Dallas.

Joonas Korpisalo struggled to a 4.96 goals-against average and .827 save percentage in the Blue Jackets’ three previous games with Carolina. This could lead to a start for Elvis Merzlikins, who looked rusty (.871 save percentage) in two outings since returning from an eight-game stint on injured reserve.

As per the Hurricanes’ usual goalie rotation, Alex Nedeljkovic should be back in net for Carolina against the Jackets. The red-hot Nedeljkovic is 5-1-0 with a .950 save percentage in his last six starts.