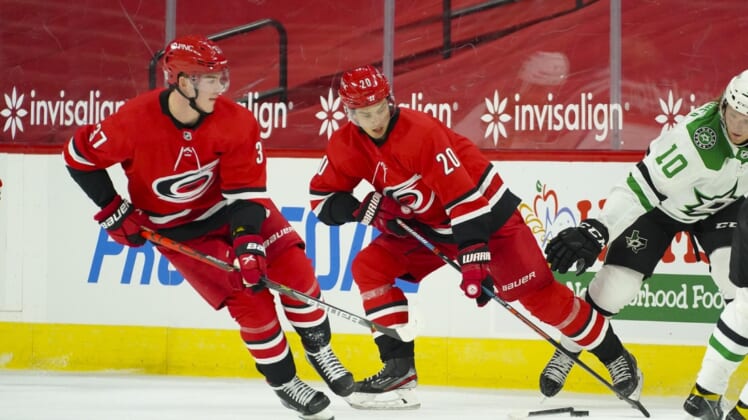 In what could have figured to be a brutal time for the Carolina Hurricanes, they’ve excelled.

Now there’s a new set of challenges as the team heads on a six-game road trip, beginning Tuesday night against the Chicago Blackhawks.

Missing four of their core players to coronavirus protocols, the Hurricanes returned from a layoff of more than a week to win three games across four nights. The 3-0 mark came against Tampa Bay (once) and Dallas (twice) — the two teams who were in the 2020 Stanley Cup finals.

“This has definitely put a lot of stress on the old job here,” Carolina coach Rod Brind’Amour said of the roster moves. “When you have games like these last few, it kind of makes it a lot easier to deal with.”

The Hurricanes lost goalie Petr Mrazek (arm) to a first-period injury Saturday. A timetable for his return is unclear and surgery is possible, so that has given extra work for James Reimer.

“It’s the reason why you train hard in the summer, so when you get put in scenarios like this you can survive and try to thrive,” Reimer said.

The contributions keep coming for the Hurricanes. While Vincent Trocheck had two goals Saturday, he provided the decisive shootout tally Sunday. In that game, Jordan Staal and Brock McGinn notched their first goals of the season.

Lineup regulars Jaccob Slavin, Jordan Martinook, Warren Foegele and Teuvo Teravainen could be close to returning to action for the Hurricanes. Of that group, all except Slavin should be back Tuesday.

“I hope we can rely on that next-man up philosophy,” Brind’Amour said. “Everyone has to contribute whether we have the regulars or not. That’s just the recipe for success.”

Among the recent newcomers to Carolina’s lineup was Drew Shore, who Sunday appeared in his first NHL game since April 2017. Shore was reassigned to the American Hockey League’s Chicago Wolves on Monday.

“It’s just nice to know you can count on other people when guys go down,” Brind’Amour said.

Rookies are coming up big for the Blackhawks.

Phillipp Kurashev and Pius Suter had goals Sunday. It was the third of the season for Kurashev and fourth for Suter.

“When they can come in and do a really good job, it just lifts the team and gives us so much more depth,” coach Jeremy Colliton said.

Five players have made NHL debuts with the Blackhawks this season. That includes center Reese Johnson during the weekend.

“You need guys to step in for us and play minutes for you like Reese,” Colliton said, noting the player’s face-off strengths. “He hasn’t had the chance to do it in the NHL, but he’s been really good at all other levels. He has earned the chance (with us).”

Carolina has outshot its opponents by 9.8 per game. A key part of the Hurricanes’ success has come on penalty killing. They’ve stopped 21 of 23 opposing power plays.

“It takes an incredible commitment to play that way on the PK and our guys to a man, and our guys are buying in and sacrificing,” Reimer said.