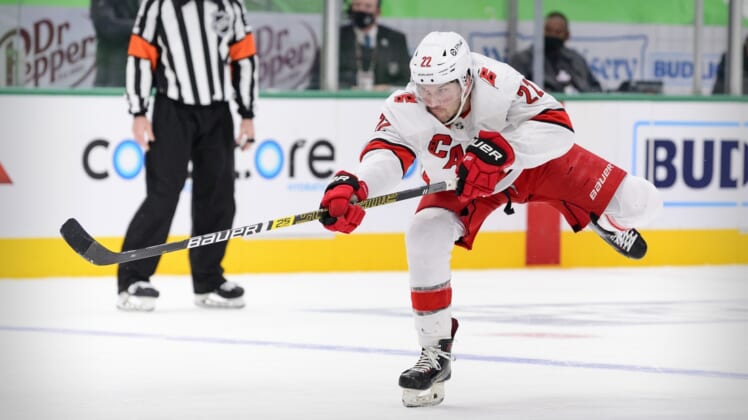 The Carolina Hurricanes are on the verge of adding new personnel to a lineup that already had been producing at a pretty good clip.

The first sign of that could come Monday night when the Columbus Blue Jackets pay a visit to Raleigh, N.C.

The Hurricanes added forwards Cedric Paquette and Alex Galchenyuk in a weekend trade with the Ottawa Senators. Carolina parted with center Ryan Dzingel in the deal.

Even with additional protocols caused by the pandemic, it’s possible that Paquette could be on board for Monday night’s game. Galchenyuk was placed on waivers Sunday.

Paquette, who had one goal in nine games with Ottawa this season, recorded three assists while playing in all 25 playoffs games for the Lightning last season.

“He was the guy that was kind of the energy guy in Tampa every time you played them,” Carolina forward Jordan Martinook said of Paquette. “He’s in on the forecheck and he hits and he plays that hard-nosed game. I’m excited to have him.”

Galchenyuk notched one goal in eight games with the Senators. He has 136 goals in a career that also includes stops with Montreal, Arizona, Pittsburgh and Minnesota.

The Hurricanes were in need of replenishing the forward position after a game last week when they had just 11 available.

“These are the kind of trades that I think help both teams in a way,” Carolina coach Rod Brind’Amour said, noting that Paquette can give a boost perhaps in a role as a fourth-line center.

Carolina and Columbus are coming off road games Saturday night that extended beyond regulation. The Hurricanes topped Dallas 4-3 in a shootout, while the Blue Jackets fell 3-2 in overtime to Chicago.

The Hurricanes hold a 9-3-0 record for their best start through a dozen games since a 9-2-1 record during their Stanley Cup-winning season in 2005-06.

“This is definitely a season when every point is crucial,” Martinook said.

The Hurricanes received the first goal of the season from Teuvo Teravainen, so that was another encouraging sign for the team. He was in his ninth game of the season.

The Blue Jackets have made strides during the past couple of weeks, coach John Tortorella said.

“I do think we’re moving the puck better,” Tortorella said. “I think we’re coming out the middle more. I think there’s more flow to our game.”

Tortorella said the Blue Jackets had one of their best periods of the season in the third against Chicago, despite giving up a tying goal.

Columbus has played five consecutive games decided by one goal, going 3-1-1 in those.

“I’m encouraged by a number of things,” Tortorella said. “… The guys are trying. We’re not going to overthink this thing.”

This starts a five-game homestand for the Hurricanes, who are 5-1-0 in one-goal games.