PREVIEW: Capitals looking to even tight series with Bruins

After three straight games decided by a razor-thin margin, the Washington Capitals and Boston Bruins know what to expect when they converge on the ice.

Craig Smith’s goal early in the second overtime of Game 3 Wednesday night continued that trend, giving the Bruins a second straight overtime victory, 3-2, in the NHL-record 12th consecutive one-goal game between the teams in the playoffs.

The Bruins will try to take command of the best-of-seven series while the Capitals seek to avoid the dreaded 3-1 series deficit as the teams meet in Game 4 on Friday night in Boston.

“It went back and forth and went to overtime again for the third straight game, double overtime, and the game ended — and so we move on,” Capitals coach Peter Laviolette said. “I would imagine that the next game is probably going to be the same type of game. You hope at the end of the night your number on the scoreboard is bigger than the opponent’s.” 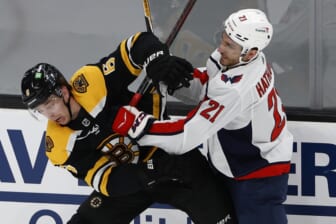 Washington took the lead on two separate occasions in Game 3 on Wednesday while Boston never led until the final horn.

Goaltending continues to be a key theme for the Capitals after 24-year-old Ilya Samsonov made his series debut in net with starter Vitek Vanecek (lower-body injury) still sidelined.

Laviolette indicated that veteran goalie Craig Anderson, who will celebrate his 40th birthday on Friday, and Samsonov will be available moving forward. However, Laviolette did not indicate who would start Friday’s pivotal Game 4.

Samsonov was thrust into action Wednesday after coming off the COVID-19 list with Anderson sitting out for a maintenance day.

The former No. 22 overall draft pick settled in nicely and smothered the majority of Boston’s chances in his 40-save effort. One momentary lapse proved costly, though, as Samsonov was slow to get back into position after playing the puck behind the net and Smith took advantage to score the overtime winner.

“That’s playoff hockey, but I think our group is just focused on the next play,” Smith said. “Obviously, every game is just a different story, and we have to continue to keep moving forward and next-shift mentality. … We’ll deal with the rest as it comes.”

Related: NHL power rankings – Barkov, Bennett drive the Panthers to the no. 1 spot

Bruins coach Bruce Cassidy’s decision to move Smith to the second-line right wing centered by David Krejci after Taylor Hall’s acquisition at the trade deadline is paying off when it matters most. Smith has recorded a point in both Bruins’ wins against the Capitals and had an assist to go along with his Game 3 winner.

Boston put itself in a good historical position as teams that have won Game 3 with a series tied 1-1 have gone on to win the series 68 percent of the time. Only 29 teams in NHL history have ever won a series after trailing 3-1 or 3-0.

Washington center Lars Eller missed Game 3 with a lower-body injury and is uncertain for Friday’s game. Boston continues to be without Ondrej Kase (upper body) after the right wing missed the first three games of the series.