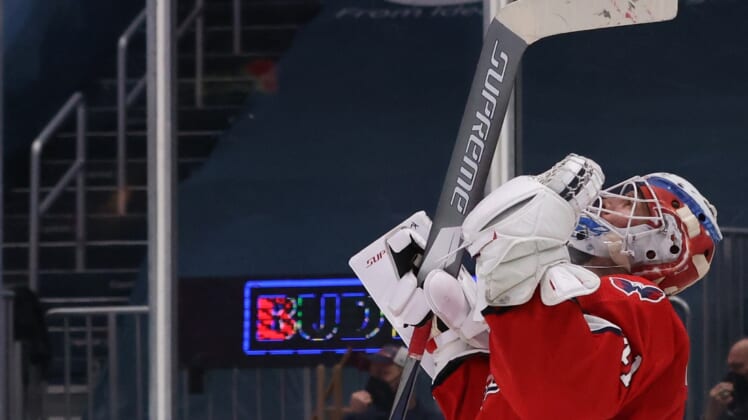 The Washington Capitals have started to play better and will vie for their third straight victory when the New York Rangers come to town for a Saturday matinee.

This game originally was scheduled for 7 p.m. ET before being moved up to 12:30 p.m.

The Capitals have played much tougher on defense this week in 3-1 wins versus both Pittsburgh and Buffalo. Goalie Vitek Vanecek has made saves on 48 of the last 50 shots he’s seen after yielding four goals in each of his previous two games.

Vanecek owns a 7-3-2 record this season while stepping in for starter Ilya Samsonov, who’s been out due to the COVID-19 issues.

“I don’t think much has changed with (Vanecek),” Capitals coach Peter Laviolette said after Thursday’s win. “He’s given us an opportunity to win hockey games from the start of the year. But I think what we were trying to do is put a better game in front of him, and so it’s been a little bit better the last couple games. But he’s given us a chance. He’s done a good job. “

Samsonov has been working out and playing with the Hershey Bears of the American Hockey League. The Washington Post reported the goalie will be coming back to Washington, and Laviolette expects him to be in the net “at some point.”

The Capitals received goals from Tom Wilson, Nicklas Backstrom and Conor Sheary in Thursday’s victory over the Sabres.

Washington has the majority of its roster back after COVID-19 issues. The Capitals are hoping to extend their winning streak with games against the Rangers and the New Jersey Devils this weekend.

New York, meanwhile, is coming in off of a 3-2 shootout victory over the Philadelphia Flyers on Thursday. The Rangers had dropped their previous four games (0-3-1) and continue to have offensive issues with just six non-shootout goals scored over their last five.

Kaapo Kakko scored in the first round of the shootout and Artemi Panarin notched the eventual winner in the second round. Defenseman Brendan Smith and Colin Blackwell tallied in regulation against the Flyers.

Even though the Rangers gave up a late goal in regulation, coach David Quinn was pleased with the overall performance.

New York was short-handed defensively with blueliners K’Andre Miller and Jacob Trouba sidelined. Miller has an upper-body issue while Trouba broke his thumb in a 5-2 loss to the Devils on Tuesday.

The Rangers will still have work on finding some more offense against a Washington team that has the capability of piling up goals. New York found that offense in a 4-2 win over the Capitals on Feb. 4.