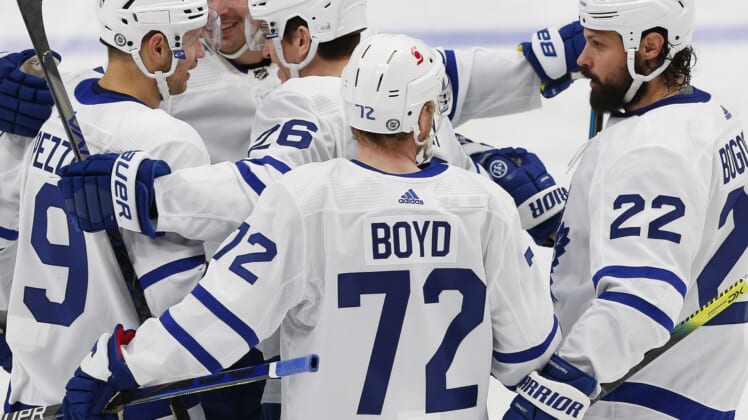 In the midst of a 3-10-2 slump, the Vancouver Canucks begin what very well could be a make-it-or-break-it five-game homestand on Thursday night when they host the North Division-leading Toronto Maple Leafs.

It will be the first of a back-to-back against the red-hot Maple Leafs, who finished off a three-game road sweep of third-place Edmonton in convincing fashion with a 6-1 victory on Wednesday night. Toronto, which played the first two games of that series minus NHL goal-scoring leader Auston Matthews, outscored Connor McDavid and company, 13-1, in the series.

Vancouver, expected to contend in the North after taking the Vegas Golden Knights to seven games in the second round of the Western Conference portion of the 2020 Stanley Cup Playoffs, finds itself five points behind Montreal for fourth place and the final playoff spot in the North with the Canadiens also holding five games in hand. And with just 30 games remaining in an abbreviated 56-game schedule, the Canucks are in a dire need of a lengthy winning streak.

Vancouver looked like it be turning things around when it blanked Winnipeg, 4-0, on Monday night behind Thatcher Demko’s 27 saves. But the Canucks failed to complete the sweep of the back-to-back on Tuesday night when the Jets pulled away in third period for a 5-2 victory.

Vancouver, a dismal 0-13-0 this season when allowing the first goal, hasn’t won back-to-back games since putting together a four-game winning streak at the end of January.

“We’re not in position to be splitting a two-game series,” said forward J.T. Miller after Tuesday’s loss. “We had to come out with at least a point today. At least put a better effort on the ice than that. … There’s no excuses. We need to be better and push ourselves.”

“I’m frustrated,” Canucks coach Travis Green admitted. “We lost way too many puck battles and were soft at times when we had the puck and that was the big difference. We had guys who just didn’t have the games they had (Monday). Winnipeg was hard on the puck, harder in battles and stronger in certain areas.”

Now here comes a Toronto team that used three different goalies over nearly 160 minutes to put together a scoreless streak that included a pair of shutouts over the high-powered Oilers. And the Maple Leafs, who are 9-1-1 on the road this season, won the first two games handily without Matthews and his NHL-leading 18 goals in the lineup.

“To win three games like that so decisively, I think it’s a real step of growth for our team,” forward Jimmy Vesey said after scoring two goals in Wednesday’s victory.

Matthews, who aggravated a right wrist injury in a 2-1 overtime victory at Calgary on Feb. 24, didn’t score but fired a game-high seven shots and hit the post on another try in 18:43 of ice time.

“I felt fine,” Matthews said. “I think a little bit rusty, but I think after the first period I felt I had my legs under me. All in all, it was a great win by the boys, an all-around team effort. … We’ll enjoy this one for sure and we’ll move on to Vancouver tomorrow.”

The two teams played a three-game series on Feb. 4-8 in Toronto, with the Maple Leafs winning all three by a combined score of 15-5. Toronto’s 18-4-2 record is the best 24-game start in franchise history.