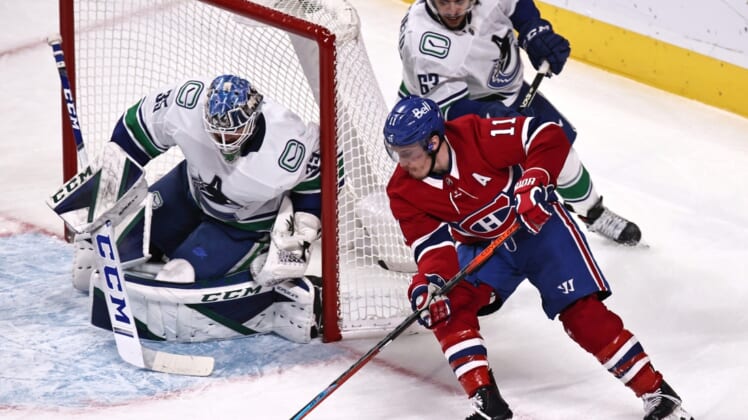 The Montreal Canadiens will be trying to regain their scoring touch Saturday night when they visit the Toronto Maple Leafs.

The Canadiens have been held to six goals in their past four games as defenses clog the area in front of the net.

Montreal lost 3-0 at home Thursday to the Edmonton Oilers despite holding a 38-31 advantage in shots on goal. And on Wednesday, the Canadiens lost 4-2 at home to the Maple Leafs.

“It’s more on us than anyone else,” Canadiens coach Claude Julien said. “Give credit to teams that want to play a certain way, but right now what we see is our game has gone down a notch. Our quick transition isn’t there. Our attack with the forwards attacking and the support from the (defense), that’s gone away a little.”

“I feel at times, there’s too much ‘one and done,'” said Habs right winger Brendan Gallagher, who has five goals this season. “Teams are doing a pretty good job competing in front of the net, but that’s where goals are scored in this league and we have to do a better job in there.

“We have to find ways to get inside body position. The difference between scoring goals and not in this league is such a fine line. When they’re going in, it seems to be a habit for you, but when they’re not going in, we have to go back to simplifying our game, find a way to win your battles and find a way to out-compete someone.”

The Canadiens have lost both times they have played the Maple Leafs this season. The Leafs won 5-4 in overtime Jan. 13 in the season opener at Toronto.

This could be a difficult spot for the Canadiens to kickstart their scoring, facing Toronto goaltender Frederik Andersen. Since joining the Leafs before the 2016-17 season, Andersen is 9-3-2 with a .921 save percentage and 2.62 goals-against average against Montreal.

Andersen has been in goal for nine of Toronto’s 11 wins this season including both of the Leafs’ wins over the Canadiens.

“He looks calm, he looks confident, comfortable,” Maple Leafs coach Sheldon Keefe said. “I think those are the traits that we’ve come to come to know when he’s at his best.”

Andersen said that he is trying to keep things simple.

“Small movements, easy tracking, just being ready,” Andersen said. “Reading the play well, and just keeping that focus on that one shot. It’s obviously a bit more complicated than that, but being on top of the puck and seeing it well is the key to my game. When I play my best, it looks easier than at other times.”

Led by Auston Matthews with 11 goals and five assists and Mitchell Marner with six goals and 15 assists, the Maple Leafs have a strong offense. Matthews was held to one assist and Marner to no points on Wednesday, but Toronto played a solid defensive game.

Keefe said that, according to his internal numbers, the Maple Leafs allowed the fewest scoring chances on Wednesday of any of their games this season.

Andersen said that he likes what he sees.

“It’s the patience in our game, the confidence that we don’t have to force it,” the goaltender said. “We let the plays develop and stick to our process. It’s really paying off.”