May 20, 2021; Toronto, Ontario, CAN; Montreal Canadiens forward Eric Staal (21) tries to get out of the way of a shot on Toronto Maple Leafs goaltender Jack Campbell (36) during the third period of game one of the first round of the 2021 Stanley Cup Playoffs at Scotiabank Arena. Mandatory Credit: John E. Sokolowski-USA TODAY Sports

The Montreal Canadiens made sure they stayed alive in their North Division first-round playoff series long enough to reward a big chunk of their fans.

The Canadiens will host the Toronto Maple Leafs in Game 6 of their best-of-seven series in front of 2,500 lucky spectators on Saturday night, marking the first time fans will be allowed to attend an NHL game in Canada in more than 14 months. Toronto leads the series 3-2.

Montreal beat Toronto 4-3 in overtime on Thursday night to avoid elimination and guarantee another home game at Bell Centre, this time in a much different environment than Games 3 and 4, which were won by the Maple Leafs to take a 3-1 series lead.

“We feel like we can come back in this series, especially going back to the Bell Centre now for Game 6,” said Nick Suzuki, who scored the overtime winner on Thursday. “It’s going to be a lot of fun to play in front of our fans, and we know it’s not going to be a full barn, but I know it’ll be loud. We’ll be ready to go.”

The thought of a Game 6 in Montreal seemed possible when the Canadiens went ahead 3-0 early in the second period of Game 5, but those feelings subsided when the Maple Leafs stormed back to tie the score, getting the final two goals from Jake Muzzin in the third period. 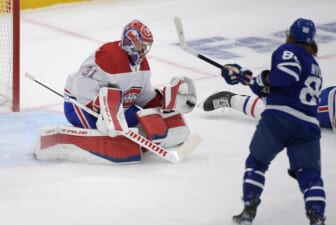 Suzuki and Cole Caufield got loose on a 2-on-0 breakaway in the first minute of overtime, however, and Suzuki scored at 59 seconds to finally start the ticket sales for Game 6.

Although disappointed in their inability to clinch at home on Thursday and advance to the second round for the first time since 2004, the Maple Leafs are confident they can end the drought in Montreal.

“We have lots of reasons to be confident and lots of reasons to believe in our group,” Toronto coach Sheldon Keefe said after Thursday’s game. “At the same time, we got another reminder today that Montreal is going to make it really difficult. They are a good team with very strong goaltending. That, in and of itself, gives them lots of belief.”

The Maple Leafs lost one of their top players when John Tavares suffered a concussion in Game 1. He skated by himself on Thursday morning but remains doubtful to return for this series.

Keefe said the Maple Leafs have more than enough firepower to move on from the Canadiens.

“We are a good team,” Keefe said. “If you look at the two games we have lost, we haven’t played nearly at our best, and yet both games were right there. When we have played well, we have been in control of games pretty well.”

The Canadiens plan to lean on the experience of players such as Corey Perry and Eric Staal.

Perry appeared in his 150th NHL postseason game on Thursday and collected his 100th point, assisting on Joel Armia’s second goal of the opening period.

Staal and Perry, both 36, are members of the exclusive Triple Gold Club, players who have won an Olympic gold medal, a World Championship gold medal and a Stanley Cup title.

“We’ve got a ton of leaders, especially that I look up to,” Suzuki said. “We had a meeting (Wednesday), and guys like Corey and Staalsy spoke up and said, ‘These opportunities in the playoffs don’t come that often, so you’ve got to make the most of it.’ “