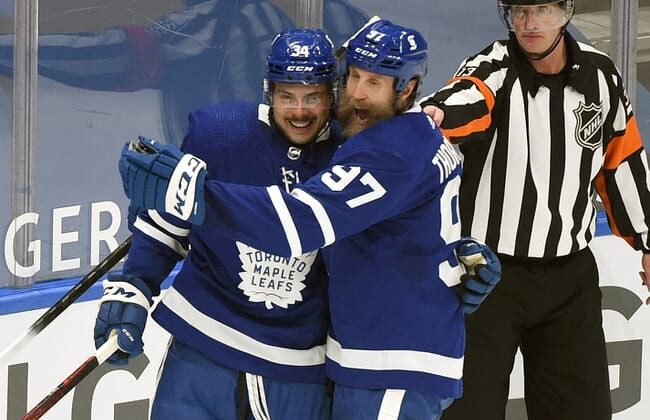 Auston Matthews seems to have a firm grasp on the NHL’s goal-scoring title.

With 16 goals, the Toronto Maple Leafs center has four more than the next in line, Brock Boeser of the Vancouver Canucks, and six more than the next three, including Edmonton Oilers power forward Leon Draisaitl entering Friday’s action.

Matthews added two goals and two assists in the Leafs’ 7-3 victory over the Ottawa Senators on Thursday to extend his point streak to 15 games.

“I’m just trying to shoot at what’s open, to be honest,” Matthews said. “The puck is going in the net right now, which is great, but the most important thing is we’re winning hockey games.”

Matthews gave Toronto a 1-0 lead at 10:29 of the first period with a power-play goal, then scored his second at 19:37 of the frame, tucking in a loose puck in front of the Senators’ net.

“He’s picking goalies apart; they don’t really stand a chance,” teammate William Nylander said. “He’s doing it consistently, too, which is unbelievable. With his shot and where he scores from, it’s the best I’ve seen.”

While Matthews continued his goal-scoring streak, Joe Thornton has two goals and six points in three games since returning from a fractured rib that kept him out for 10 games.

He had a goal and two helpers against the Senators.

“I’ve felt fine,” Thornton said. “It’s good for me to get a bunch of games in a row like this to get my timing back. I like rolling every other night and playing lots of games, so I think (the workload) is going to help me.”

The Leafs visit the Montreal Canadiens on Saturday in a battle of the top two teams in the NHL’s North Division. The Canadiens haven’t played since last Saturday when they beat the Leafs 2-1, ending a Toronto win streak at four games.

After this six-day break, the Canadiens now launch into a hectic schedule with 41 games in 78 days.

“If you’ve played a few years, you kind of understand the grind, you understand how you have to be on mentally when you come to the rink, and it’s so important to be able to turn it off when you go home,” said the 29-year-old veteran.

He tried to keep his mind off hockey while he was away from the rink all week but for light skates and practices.

“If you’re thinking about it, or if you don’t kind of have that to get away from the rink and kind of shut your mind off from hockey, it can wear on you,” Chiarot said. “I think getting that rest and getting away from the rink is important, especially with a schedule like we’re going to have, two months of playing every other day.”

The extended break had its good and bad points for left winger Tomas Tatar.

His time off started a day earlier than the rest of his team since he was a healthy scratch last Saturday against the Leafs.

“I was kind of sad there’s not more games because you want to get out there as soon as possible and play, and just be hungry and show you want to be in the lineup,” Tatar said. “But on the other hand, that schedule is very, very tough, so I’m sure guys were very happy we have this kind of stretch where we can correct our stuff and we can work on our things to be a better team.”

Canadiens head coach Claude Julien said Tatar has to step up and be a bigger part of the lineup as the team faces the busy schedule down the stretch to the playoffs.

“In order for us to have success this year, we’re going to need everybody,” Julien said. “That includes Tomas Tatar.”

Tatar has four goals and eight points in 14 games. It’s reasonable for Julien to expect a 20-plus-goal season from the Slovakian forward.

“He’s a guy who can really help us,” Julien said. “You can’t read anything into the fact that he missed a game. We’ll see him in the lineup, and we hope that he’ll be able to bring what he can bring.

“We worked with him. We showed him the things we’d like him to improve. We want a little bit more from him because we know it’s there. It’s as simple as that.”