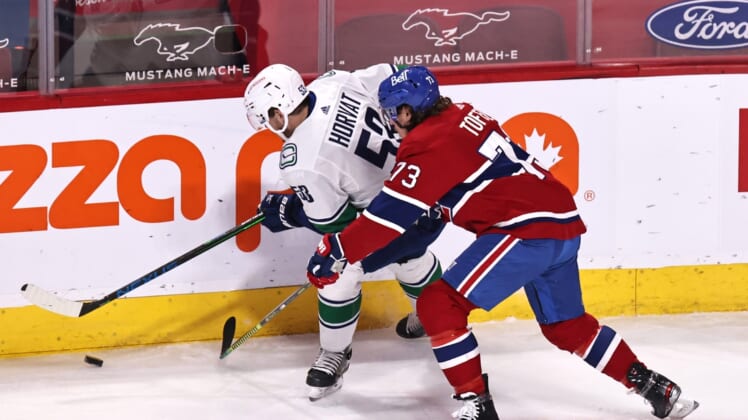 The Vancouver Canucks are playing well enough that they are even finding ways to beat the Montreal Canadiens, who continue to miss out on opportunities to earn more points.

One night after needing overtime to beat the Canadiens, the Canucks aim for a season-high fifth straight victory when they play at Montreal again Saturday.

After Montreal’s Nick Suzuki tied the game with 56.3 seconds left in regulation Friday night, J.T. Miller scored at 2:01 into the extra session to give Vancouver a 3-2 win.

The Canucks have won seven of their past eight games overall, and they beat the Canadiens for the second time in three meetings this month. Vancouver had lost four in a row to Montreal in January and February.

Each of the Canucks’ past four wins came by one goal, and the past three were settled in either overtime or a shootout — all on the road.

“If we believe in our game, have faith in the system and play the right way most nights, we’re going to get the results,” Miller said.

“If we keep playing this way, the wins are (going to keep coming), sometimes they won’t be pretty, but if you do it more times than not and keep playing the right way, nine times out of 10 you’re going to get the right results.”

Miller has recorded overtime goals twice this week. His winner Friday was the winger’s first in eight games against the Canadiens this season. Teammate Brock Boeser (team-leading 31 points this season) had an assist Friday, giving him seven total points against Montreal in 2021, matching Miller’s total.

Vancouver’s Thatcher Demko made 29 saves on Friday to improve to 8-1-0 with a 1.74 goals-against average and a .950 save percentage in March. However, teammate Braden Holtby, who allowed four goals in each of his past two starts, could see his first action since March 2 on Saturday.

Holtby, however, is 1-2-0 with a 4.90 goals-against average versus Montreal this season.

“If we get in these situations down the stretch, it’s something that’s got to change,” said Suzuki, who snapped a nine-game goal drought Friday. “I don’t know if we’re in our heads about it.

“Just finding that two points is going to be huge for us coming down the stretch. All these points are going to be important.”

In his first start since March 11, Montreal’s Jake Allen stopped 25 shots on Friday but fell to 0-2-4 with a 2.77 goals-against average in his past six starts. Carey Price, though, is likely to be back in net Saturday before the second half of the back-to-back set.

Price (2.66 goals-against average overall) is 3-0-2 with a 2.14 GAA versus Vancouver this season. He stopped 54 of 56 shots in winning his past two home starts overall.

With a goal Friday, Montreal’s Corey Perry has four goals and three assists in 10 games this month. Half of his six goals this season have come in six games against the Canucks.