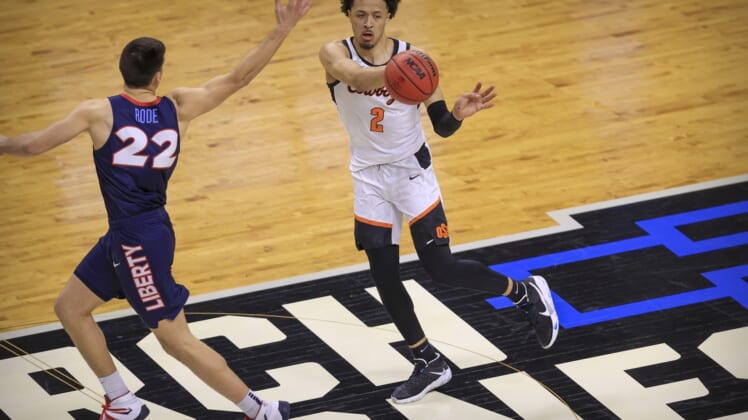 Cade Cunningham got off to a slow start in his NCAA Tournament debut.

But the freshman sensation finished strong, leading fourth-seeded Oklahoma State into the second round of the Midwest Region at Hinkle Fieldhouse in Indianapolis on Sunday.

Cunningham, a 6-foot-8 guard, scored nine of his 15 points in the final 2:55 Friday — on a 3-pointer and six free throws — as the Cowboys overcame a three-point halftime deficit to defeat No. 13-seeded Liberty 69-60.

Before the tournament began, Cunningham said he wanted to emulate Carmelo Anthony, who in 2003 led Syracuse to the national championship as a freshman.

But Cunningham, the Big 12 Conference Player of the Year and the likely top overall pick in the next NBA draft, missed his first five shots and scored just one point in the first half as the Cowboys fell behind 30-27 on Friday.

“Cade’s shots weren’t falling in the first half, but he saw throughout the game that they would start falling,” said teammate Avery Anderson III, who scored a game-high 21 points. “And that was big time.”

Cunningham, who shot 3-for-14 from the field, wasn’t made available for postgame interviews.

“I don’t really worry about Cade,” Oklahoma State coach Mike Boynton said. “I think everybody else worries about him a lot more than I do. First of all, I’ve known the kid since he was 14. I know how he’s wired, and I know that he wants to play to win.

“And if that means he’s got to score 10 points and get other guys involved and allow other guys like Avery Anderson or Matthew-Alexander (Moncrieffe) to kind of carry the load offensively, he’s comfortable with that.”

Moncrieffe scored 10 points for the Cowboys.

Oregon State, which won the Pacific-12 Conference tournament to earn an NCAA berth, never trailed in upsetting the Volunteers.

It was the Beavers’ first NCAA Tournament victory since 1982. They’re in the tournament for just the second time since 1990.

“We know there was some doubt, and we had to ignore all that,” Beavers coach Wayne Tinkle said. “We never threw in the towel, we never doubted ourselves, we just do what we do.”

It has been quite a run for Oregon State, which was picked to finish last in the Pac-12’s preseason media poll.

“In the preseason, when we saw we were picked 12, it really lit a fire under us,” Silva said.

The Beavers shot 48.2 from the field percent in their first-round victory and registered 20 assists on 27 field goals. They built a 33-19 halftime lead, and Tennessee never got closer than 10 points in the second half.

“We really have come together as a team, and you saw it on display,” Tinkle said.