PREVIEW: Bucks, Suns both rolling ahead of matchup 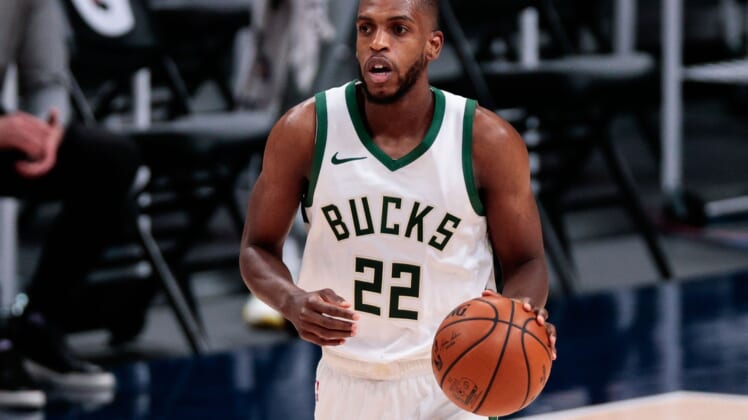 Two hot teams square off when the Milwaukee Bucks visit the Phoenix Suns on Wednesday night.

The Bucks have won a season-best five straight games and are 3-0 on a six-game road trip after posting a 125-112 victory over the Denver Nuggets on Monday.

Phoenix has won three straight and six of its last seven after a 119-113 triumph over the visiting Cleveland Cavaliers on Monday.

The Suns recorded the win despite point guard Chris Paul (hamstring) missing his first game of the season. Paul is questionable to play Wednesday.

E’Twaun Moore moved into the starting lineup while Devin Booker picked up more of the playmaking responsibilities. It didn’t affect Booker’s play, as he poured in a season-high 36 points, matched his season best of five 3-pointers and added eight assists.

“You have to make adjustments,” Booker said after the victory. “I wanted to take on that facilitating role, still find places to be aggressive but make sure I’m getting everybody involved the way Chris does when he’s in.”

The Bucks were missing their point guard, Jrue Holiday, against the Nuggets, and it appears he will be sidelined for the rest of the excursion, if not longer, due to health and safety protocols.

Milwaukee didn’t clarify anything per Holiday’s status, but teammate Khris Middleton made comments after Monday’s game that suggested the 30-year-old tested positive for COVID-19.

“It’s nothing to play around with,” Middleton told The Athletic. “And once (Holiday) tested positive, you immediately think about his health, his safety and his family back home. He has little kids, too, that he has to worry about.”

Middleton picked up part of the passing void by racking up a career-best 12 assists against Denver. He also had 29 points, eight rebounds and three steals.

Giannis Antetokounmpo contributed 30 points, nine rebounds and three blocked shots. He was the recipient of Middleton’s final assist in the latter stages and slammed home a dunk to help Milwaukee put the game away.

“He’s a threat out there,” Antetokounmpo said of Middleton. “He’s going to find you.”

“I thought Khris was great,” Budenholzer said. “He’s a great playmaker, and the ball was probably in his hands even more.”

Milwaukee’s offense has been electric during the winning streak. The Bucks have scored at least 123 in each of the victories while winning by an average margin of 20.8 points.

Antetokounmpo is averaging 29 points and 10.7 rebounds through the first three games of the trip. Middleton is averaging 21.3 points.

Phoenix defeated the Detroit Pistons and Boston Celtics to start its seven-game homestand. The 119 points scored against Cleveland were the team’s most since a 130-126 overtime loss against the Nuggets on Jan. 22.

Mikal Bridges also played well against the Cavaliers, producing 22 points on 8-of-10 shooting. Fill-in starter Moore had a season-best 17 points on 7-of-10 shooting while playing 40 minutes.

Count Booker among those impressed by Moore’s performance.

“Everybody knows, man, your opportunity is going to come,” Booker said of Moore. “Stay ready so you don’t got to get ready.”

Booker has topped 20 points in four of five games since returning from a hamstring injury.

Big man Deandre Ayton contributed 15 points and 16 rebounds against Cleveland. He has 15 double-doubles in 23 games this season.

The Suns have won three of the past four meetings after the Bucks won the previous six.