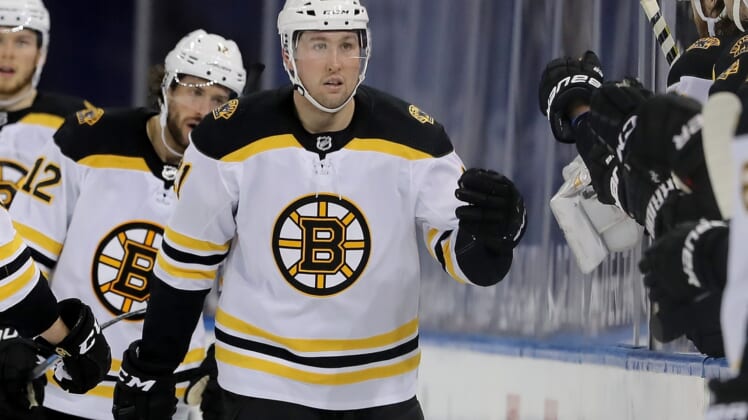 On Saturday night, the New York Islanders will hope to prove their shootout loss on Thursday was no more damaging than any other one-goal defeat.

Two teams accustomed to close games are scheduled to face off when the Islanders host the Bruins in Uniondale, N.Y., in the second matchup of the season between the East Division foes.

The Bruins will be completing a seven-game road trip after beating the New York Rangers 1-0 on Friday for their fifth win in a row.

The Islanders squandered a trio of one-goal leads Thursday night, including the last one in the final 30 seconds of regulation in a 4-3 shootout loss to the visiting Pittsburgh Penguins.

Boston’s Nick Ritchie scored the game’s lone goal shortly before the midway point of the second period Friday, and Jaroslav Halak stopped all 21 shots he faced. The Bruins remained both red hot and uncannily successful in one-goal games regardless of where they are played.

A win Saturday by the Bruins would match the longest winning streak consisting entirely of road victories in franchise history, established first from Feb. 17-26, 1972, and then matched from Feb. 17-March 1, 2011.

The Bruins are 10-1-2 this season, with seven wins by one goal. Their five-game winning streak includes four straight one-goal victories and began Feb. 1 with a 5-3 win over the Washington Capitals in which Boston came back from a 3-0 deficit.

Close games are nothing new for the Islanders, who handed the Bruins their lone regulation loss this season with — what else? — a 1-0 victory in Uniondale on Jan. 18.

But Bruins-esque success has eluded the Islanders, who are 2-3-3 in their past eight games, a span in which they have won once by one goal and fallen five times by two goals or fewer, including four times by a single goal.

The Islanders appeared ready to earn a third straight victory Thursday when Mathew Barzal scored a tiebreaking goal with 6:25 left in the third period. However, the Penguins pulled goalie Casey DeSmith and tied the score with 18 seconds left on a goal by Evgeni Malkin. Sidney Crosby subsequently produced the only goal in the shootout.

A regulation win over the Penguins could have given the Islanders some breathing room in the densely packed middle of the East Division, but coach Barry Trotz made it clear simply getting the one point would minimize any what-if fretting New York might experience after the narrow loss.

“There’s no reconciliation. You collect points in this league,” Trotz said Thursday night. “Every night if you can get a point, it’s huge. We’ll take points every night. We’ll be in a good shape, I guarantee you that. You look at a weekly segment — if you can get four or five points a week, you’re in pretty good shape. We’re doing that.”