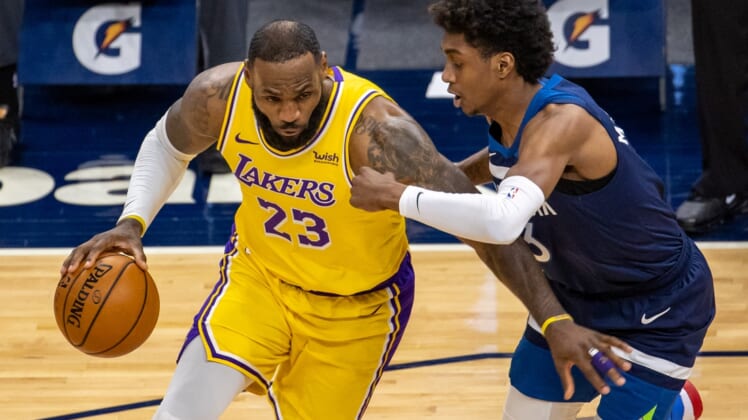 LeBron James relishes the challenge of facing an NBA contender such as the Brooklyn Nets, whom he and the Los Angeles Lakers will host on Thursday.

“It’s always exciting for me to go against some of the best guys in the game, and they got three of them,” James said, referring to Kevin Durant, Kyrie Irving and James Harden. “We definitely love to be (at full-strength) when you play against a team like that and see at that point in the season where you match up against some of the best teams in the league. Obviously, we won’t be (at full-strength) on Thursday.

“But other than that, yeah, I love going out there and just being out on the floor with some of the best to play this game.”

The Nets played without Durant (hamstring) and Irving (back) in Tuesday’s 128-124 win at the Phoenix Suns on Tuesday. But that didn’t prevent Harden from leading a big second-half rally.

“It’s the true definition of a team,” said Harden, who went 14-for-22 from the field, according to the New York Post. “Coming in two men down, it’s ‘next man up.’ (This) was the perfect example of that. We got down 20-something at halftime, and we didn’t give up, we didn’t quit. We kept fighting and cut the deficit down and kept fighting and gave ourselves a chance to win at the end of the game and things went our way.”

The availability of Irving, who scored 40 points in Monday’s 136-125 victory over the Sacramento Kings, and Durant for the Lakers isn’t known. Both were listed as day-to-day on the injury report.

Durant returned Saturday after missing a week due to the NBA’s health and safety protocols and had 20 points, six assists and five rebounds in 134-117 win over the Golden State Warriors. But he tweaked a hamstring during the game, resulting in him missing the last two games.

The Lakers will play without Anthony Davis (calf), who is expected to be sidelined until after next month’s All-Star break. Davis sustained the injury in the Lakers’ loss Sunday to the Denver Nuggets.

But the Lakers, who have won eight of their last nine, bounced back Tuesday in a 112-104 decision against the Minnesota Timberwolves. James had 30 points, 13 rebounds and seven assists. Dennis Schroder contributed 24 points and Montrezl Harrell had 17 points and six rebounds.

“We’ve got a lot of guys on this roster I believe in,” Vogel said.