PREVIEW: Brooklyn Nets aim to close out series in Game 5 vs. Boston Celtics 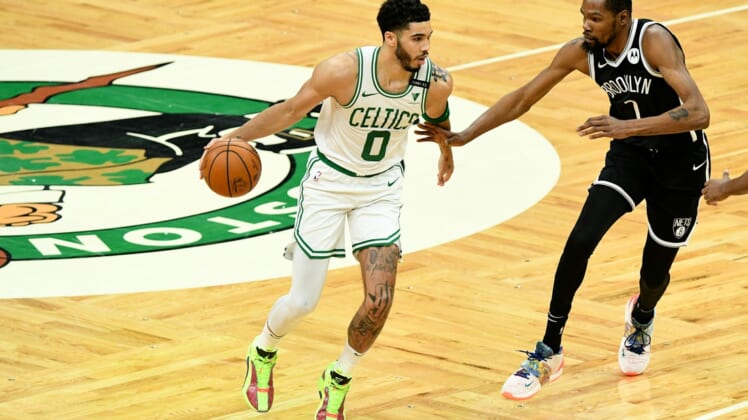 May 30, 2021; Boston, Massachusetts, USA; Boston Celtics forward Jayson Tatum (0) controls the ball in front of Brooklyn Nets forward Kevin Durant (7) during the first half of game four in the first round of the 2021 NBA Playoffs. at TD Garden. Mandatory Credit: Brian Fluharty-USA TODAY Sports

After the Brooklyn Nets scored the most points in franchise history in a postseason game, Kevin Durant expressed a strong desire not to return to Boston.

Durant’s sentiment was based more on his response to a fan throwing a water bottle in Kyrie Irving’s direction after the Nets secured Game 4, but also on his desire to end the first-round series with the Celtics as quickly as possible.

The Nets get their first chance at closing out the series Tuesday night when they host the Celtics in Game 5.

A win would clinch Brooklyn’s first trip to the Eastern Conference semifinals since 2014 and set up a showdown with the third-seeded Milwaukee Bucks. A loss sends the series back to Boston for Game 6 on Thursday.

The Nets are on the verge of advancing after getting a 141-126 win on Sunday when Brooklyn rebounded with an efficient performance after its 125-119 loss in Game 3 on Friday.

“We know how these people here are in Boston. We know how passionate they are about Kyrie in particular — they’re still upset at him,” Durant said. “That’s no reason for them to act childish. Glad we got the ‘W.’ Hopefully, we don’t have to come back here this year.”

Durant scored 42 points on 14-of-20 shooting, which was one off the Nets’ playoff franchise record. Irving finished with 39 on Sunday after shooting 6-of-17 in Game 3, and James Harden added 23 and 18 assists.

“We ran more actions,” Brooklyn coach Steve Nash said. “We were still, I think, terrific in isolation but we ran more action, got more people involved, had a lot more assists, a lot more balance and clearly we had a great shooting night as well.”

The Nets are doing all three things extremely well in this series as they enter Tuesday averaging 123.5 points on 49.3 percent shooting, 41.6 percent from 3-point range and 92 percent from the foul line.

The Celtics are on the verge of losing in the first round for the first time since 2016. While Jayson Tatum has scored 90 points in the past two games after shooting 9-of-32 in the first two games, Brooklyn’s focus on Sunday was containing Tatum’s supporting cast. 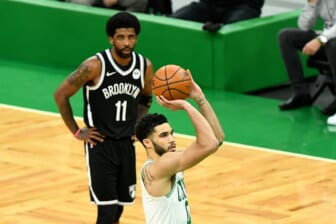 “Offensively, we just weren’t pretty consistent all night,” Boston coach Brad Stevens said. “But when they (the Nets) went and got going individually, it’s almost like we overacted and started over-scrambling, over-blitzing, trying to trap and it just opened up easier opportunities and then everybody’s rolling.

“Obviously, it’s hard to watch those guys go isolation, it’s hard to play them one-on-one. They do a really good job if you run and jump them, trap them, they can get rid of it. They got good players in the middle of the floor and then great shooting around them. We have to be a little bit more solid, but we got hit by a good punch and we need to be ready to deliver one on Tuesday.”

Among the things Stevens would like to avoid is not being able to sustain a quick start. The Celtics held a nine-point lead a little over halfway through the first quarter and then allowed the Nets to make their first 10 shots of the second and trailed by double digits for the final 28:45.

Kemba Walker (left knee), who is shooting 31.7 percent in the series, sat out Sunday along with Robert Williams III (sprained left ankle).