The Tampa Bay Lightning have followed a postseason defeat with a victory 13 consecutive times and must extend that run when they play host to the New York Islanders on Friday to keep alive their dreams of repeating as Stanley Cup champions.

Following a disappointing 3-2 overtime loss to the Islanders on Wednesday — a game in which they held a 2-0 lead — the Lightning have confidence they can claim their Game 7 showdown in their Stanley Cup semifinal series, but know the task goes beyond relying on past success.

“I love the way our team has responded in the playoffs after losses, but you can’t hang your hat on that and say, ‘Well, we haven’t lost the last two years after a loss, or we won every game after a loss in the last two years, so we’re going to win,’ It’s a faulty mindset,” Lightning coach Jon Cooper said.

“You can plug your players with cliches and pump them up all these different ways, but for our group, who has been down this road before, I’m so confident in just the way that they prepare, the way they play, their battle for each other.”

Another reason for the Lightning to feel confident is how they handled the Islanders in their last home game, an 8-0 victory. 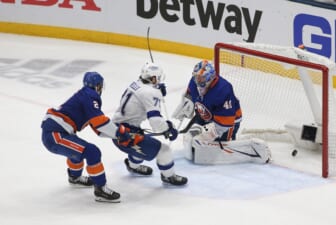 However, Tampa Bay may have to play this crucial clash without top point scorer Nikita Kucherov, who left due to injury early in Wednesday’s game. There was no update on his status.

“Obviously, we’re hoping he plays,” forward Barclay Goodrow said. “But if he doesn’t, it’s going to take a little bit more from everyone in the lineup to try to replace a guy like that.”

As much as the Lightning must be respected for being the defending champs and all they’ve achieved this season, the Islanders earn full marks for making this series go the distance. 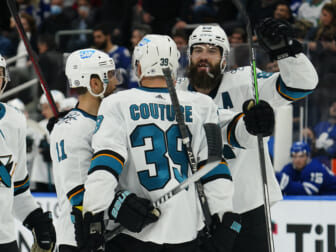 New York, which trailed 2-1 and 3-2 in the series, already managed series comeback victories over both the Pittsburgh Penguins and the Boston Bruins to reach the semifinals. The Islanders — who are looking to reach the Stanley Cup Final for the first time since 1984, when their run of four consecutive titles was snapped by the Edmonton Oilers — have erased deficits in seven of their 11 victories in this year’s playoff run.

“It’s about narrowing your window of focus and just focusing on what’s in front of you,” forward Cal Clutterbuck said. “During the game it’s just the next shift, it’s the next puck. If you get down a couple in a game, what can you really do but just continue to be yourself and really just keep going?

“If you get it you get it, if you don’t you don’t. Obviously you’d like to get up early in a game, but we’ve had a lot of situations in the playoffs where that hasn’t been the case and we’ve won those games, too.”

Curiously, the last time the Lightning played a Game 7 was in the semifinals in 2018, and they lost to the Washington Capitals coached by current Islanders bench boss Barry Trotz.

“You’re going to have two focused teams, Game 7, with a chance to go to the Stanley Cup,” Trotz said. “It doesn’t get much better than that for either organization and all the players and all the coaches. It just doesn’t. These are things that when you’re a young kid or young coach, you dream of these situations. So there’s one (Friday) night and that’s fantastic.”