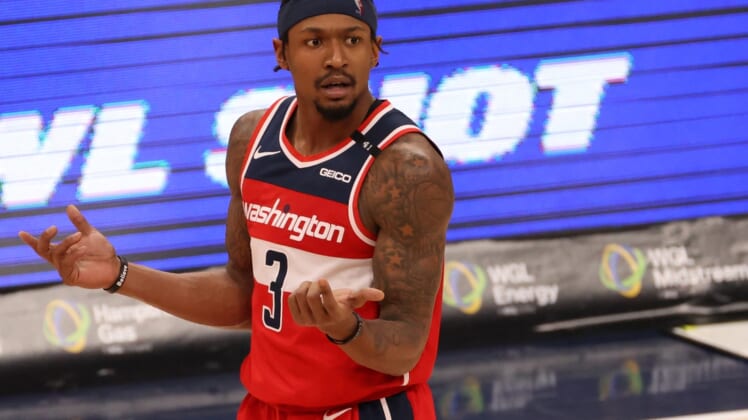 The Boston Celtics will seek to avoid dropping back to .500 for the first time since Jan. 1 when they visit the Washington Wizards on Sunday afternoon.

The Celtics were a season-best five games over .500 at 8-3 one month ago, but have since lost nine of 14, including six of nine on the road.

However, they were beaten 108-102 at home by the Detroit Pistons on Friday and now stand at 13-12 as they embark on the only road outing in a stretch of five of six at home.

The Celtics started Payton Pritchard and Semi Ojeleye in the backcourt against Detroit with Marcus Smart (strained calf) injured and Kemba Walker resting.

Walker is expected to play against the Wizards, but Ojeleye isn’t after he had to leave Friday’s game with a sore right knee.

Jaylen Brown scored 27 points in 36 minutes on the second night of a back-to-back against the Pistons after Celtics president Danny Ainge cautioned the club would be careful with the emerging star, who has struggled of late with tendinitis in his patella tendon.

“It’s a very common thing among NBA players,” Ainge said of the injury. “We’ll just keep tabs on it the best we can and try to get the best version of Jaylen that we can have.”

The Celtics have another back-to-back scheduled Tuesday and Wednesday, with Denver and Atlanta visiting.

Brown had 27 points and Jayson Tatum 32 when the Celtics won at home over the Wizards last month. Brown’s game-high 13 rebounds helped Boston gain a 49-38 dominance on the boards.

Bradley Beal went for 41 points in the loss, two nights after exploding for 60 at Philadelphia. He has since scored 30 or more points in nine of 12 games but was held to 24 on 8-for-20 shooting in a home loss to Toronto on Wednesday and was rested Friday against the New York Knicks.

Beal is expected to play Sunday as trade rumors continue to swirl. He was clearly frustrated when interviewed after the loss to Toronto, during which he shot 1-for-6 on 3-pointers and the Wizards finished 12-for-41.

“Gravity,” he responded when asked what the problem had been on the long-range shots. “Gravity just isn’t on our side. Something’s in the air. Maybe if I play on the damn moon, shots are gonna go in.”

Russell Westbrook missed a triple-double by one rebound (23 points, 10 assists) in Friday’s 109-91 home loss to the Knicks. Making his first start, Garrison Mathews had 14 points in Beal’s place.

The Celtics haven’t played at Washington in more than a year, having lost 99-94 last January in the clubs’ only meeting in the nation’s capital last season.

With Beal out of action with a leg injury that night, Ish Smith paced the Wizards with 27 points.