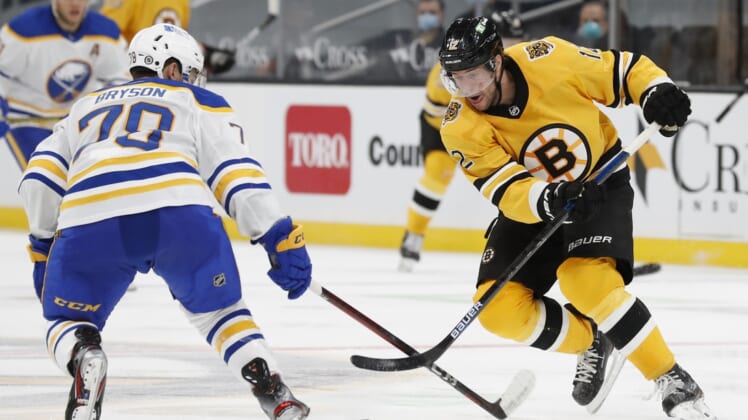 The schedule appears to be presenting the Boston Bruins with a path to some much-needed points as the season’s stretch run approaches. But the Bruins received another reminder Saturday that there are no sure things in the NHL.

The Bruins will look to extend their points streak when they host another sub.-.500 foe Sunday afternoon. The New Jersey Devils are scheduled to visit in the opener of a two-game series.

The Bruins dodged a potentially disheartening loss Saturday afternoon, when they scored twice in the third period to come back and edge the visiting Buffalo Sabres, 3-2. The Devils last played Friday, when they fell to the host Washington Capitals, 4-0.

The Bruins took a rocky path to earning points in their fourth straight game (3-0-1) Saturday. The Sabres, mired in the longest losing streak of the shootout era, led 1-0 after one and 2-1 after two and didn’t trail until Craig Smith scored the tie-breaking goal with 3:50 left in the third to hand Buffalo its 17th straight defeat (0-15-2).

But the Bruins need points in general, not necessarily style points, especially given the state of their undermanned roster and the tightly packed race for the fourth and final playoff spot in the East Division. The win kept them three points ahead of the fifth-place Philadelphia Flyers.

“It’s a battle — there’s no easy games in this league,” Bruins head coach Bruce Cassidy said. “Credit to us. We played winning hockey in the third period (at) both ends of the ice.”

Boston, which returned to action Thursday after a two-game coronavirus pause, played Saturday without leading scorer Brad Marchand, who was placed on the NHL’s COVID-19 protocol hours before faceoff, as well as Jake DeBrusk and Sean Kuraly, both of whom have been in the protocol for more than a week. Assistant coach Kevin Dean was also deemed a close COVID contact Saturday and will be out through at least the weekend.

In addition, goalie Tuukka Rask (upper body) and center Karson Kuhlman (hand) didn’t play Saturday after suffering injuries in Thursday’s 3-2 overtime loss to the New York Islanders. While Kuhlman suffered no structural damage, there is no timetable for Rask, who missed six games with an undisclosed injury prior to playing one period Thursday.

The challenges of trying to return from a coronavirus pause are familiar to the Devils, who are 8-13-2 since their 15-day stoppage ended Feb. 16. New Jersey has won consecutive games just three times since then and was outscored 8-3 in losing back-to-back games to the Capitals on Thursday and Friday.

The loss Friday dropped the Devils to 2-2-2 in the second game of a back-to-back set since Feb. 16.

“We lacked energy for sure,” Devils head coach Lindy Ruff said Friday night. “I don’t know whether the schedule caught up to us, but it was team-wide, and when you don’t have energy, you’re not skating as well, you’re not executing as well.”