PREVIEW: Blues hope to control traffic in Game 3 vs. Avalanche

The St. Louis Blues will try to fight back into their first-round playoff series when they host the Colorado Avalanche on Friday night.

The Avalanche dominated the first two games of the best-of-seven series, winning 4-1 and 6-3 in Denver both games. Games 3 and 4 will be in St. Louis.

“At the end of day, we lost a hockey game, so the momentum is on their side,” Blues forward Brayden Schenn said. “That’s not breaking news by any means, but I think we did some good things.”

But the Blues did not contain Avalanche star Nathan MacKinnon, who had three goals and an assist.

The Avalanche converted both of their power-play opportunities, with MacKinnon firing long shots through screens. One shot went past goaltender Jordan Binnington cleanly and one was deflected in by Joonas Donskoi, who finished with two goals and an assist. 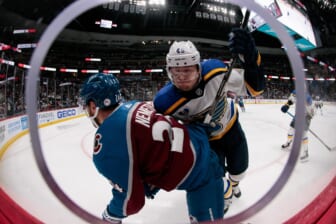 MacKinnon also scored an even-strength goal through traffic before capping his night with an empty-netter. He credited linemates Gabriel Landeskog and Mikko Rantanen for causing havoc in front of Binnington.

“All my goals are with great screens in front,” MacKinnon said. “(Landeskog), Mikko are beasts down low. Without those guys battling and mucking it up in front when I’m up high, those pucks don’t go in. Everyone’s helping out, for sure.”

Blues coach Craig Berube said his team must find ways to keep screened shots from getting through to Binnington.

“I get there’s traffic,” Berube said. “There’s gonna be traffic. We gotta fight through it and we gotta block shots. Or box people out of there. But it’s hard. You’re not gonna box people out if they have position on it, so we need to step in front of it and block the shot.”

The Blues’ challenge will be greater if defensemen Robert Bortuzzo and Justin Faulk are unable to play Friday. Bortuzzo left Wednesday’s game after taking an elbow from Avalanche forward Tyson Jost.

Faulk was knocked out of the game by Nazem Kadri’s flying blind-side head shot, which earned Kadri a match penalty. Faulk left the ice under his own power, but he was clearly groggy.

Berube didn’t offer an update on Faulk or Bortuzzo after the game Wednesday, and the team was off Thursday.

The NHL has suspended Kadri pending a hearing. He was offered an in-person hearing, which indicates a suspension of six games or more is possible.

“Kadri, the guy can’t control himself,” Schenn said. “In the playoffs, he’s a repeat offender, bad hits, greasy hits, and he’s got a guy in a vulnerable position, and he picks nothing but the head. … Hopefully the league takes care of it. We need to now focus on Games 3 and 4, and the league will take care of those guys’ hits.”