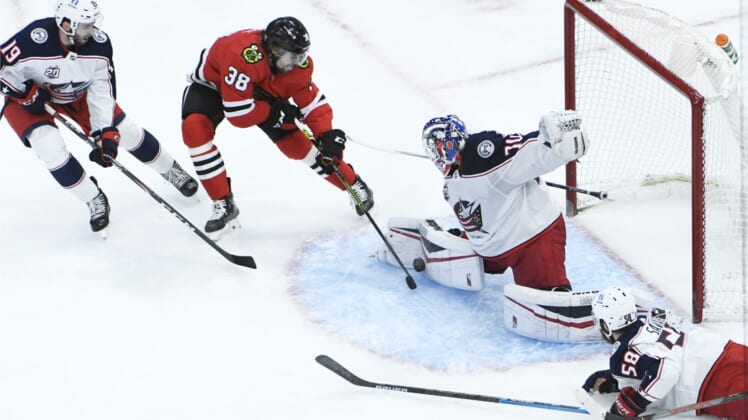 The Columbus Blue Jackets will go for their third win in a row when they visit the Chicago Blackhawks on Sunday night.

The game will mark the second time in three days that the teams have played each other. In the opener of a two-game set Friday night, Columbus held on for a 2-1 win behind goals from Oliver Bjorkstrand and Eric Robinson.

The Blackhawks planned to practice Saturday between games, but they called off the practice session because of possible exposure to COVID-19. The team later announced that forward Ryan Carpenter and defenseman Nicolas Beaudin had been added to the NHL’s COVID-19 protocol list, increasing the tally to five Chicago players on the list.

Players can be placed on the list if they test positive for the coronavirus, have shown symptoms, or had close contact with someone who has tested positive for COVID-19.

“The Chicago Blackhawks organization has, and will continue to follow, all recommended guidelines to protect the health and safety of players and staff as set by the NHL as well as local and state agencies,” the Blackhawks said in a statement. “The Blackhawks will not comment further at this time and information on Sunday’s schedule will be announced at a later time.”

If the game goes on as scheduled, Chicago will have to find a way to solve Columbus’ goaltending. Joonas Korpisalo shined in Friday’s opener, stopping 31 of 32 shots to improve to 2-1-2 with a 2.17 goals-against average and a .936 save percentage.

“I like the way it’s worked out,” Blue Jackets coach John Tortorella said. “The schedule, I think, forces it this way, and we’re very fortunate to have the two goalies that we do have.”

Lankinen’s solid play has been squandered by a quiet Blackhawks offense, which has four goals in the last three games.

“We want to score more, for sure,” Blackhawks coach Jeremy Colliton said. “We’re creating chances. We’re generating more in the offensive zone than we have in the past. (The) transition chances I feel will be there with the group we have.

“(But we’re) missing a little bit of execution when we have the opportunity off the rush. Just not quite finishing, not quite making that last pass. But I believe that will come, too.”

The Blue Jackets, who have eight goals in their past three games, are led by Bjorkstrand with eight points (three goals, five assists) in his first nine games. Alexandre Texier is second on the scoring list with six points (four goals, two assists).