PREVIEW: Columbus Blue Jackets aim to get back on track vs. Hurricanes 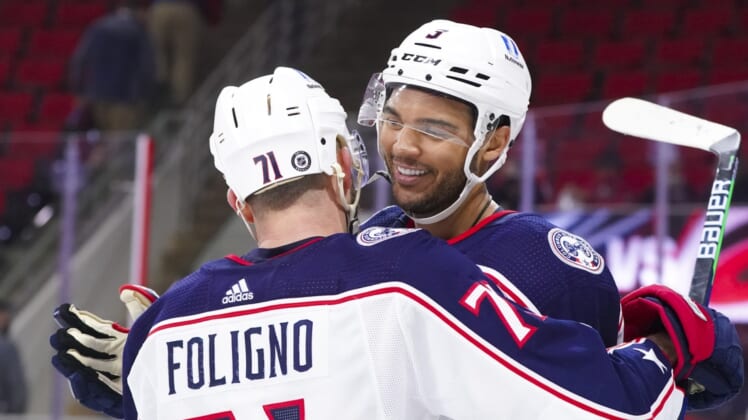 Seth Jones was scoreless in 27 career games against Carolina.

Until Thursday night, that is.

Jones scored twice, including the winner with 50.4 seconds remaining in overtime, as the Columbus Blue Jackets defeated the host Hurricanes 3-2 in Raleigh, N.C.

The teams will continue their four-game series Saturday in Raleigh before shifting to Columbus for the final two.

“We needed someone to take control of the game for us,” Columbus coach John Tortorella said of Jones. “I thought he stood up and said, ‘I’m going to be the guy tonight.’ It’s one of the better games I’ve seen him play since he’s been here, at an important time.”

The overtime goal came on a wrist shot from the left faceoff circle on a two-on-one rush with Jack Roslovic. It was Jones’ ninth overtime goal since entering the league in 2013-14, tied with San Jose’s Brent Burns for the most among defensemen in that span.

“I was just trying to be aggressive,” Jones said. “I want to get that in my game a little bit more.

“Crossing the blue line, I thought (Carolina defenseman Dougie) Hamilton was in a pretty good spot. I looked to pass first, and when I got to the top of the circle I was really thinking shot. With the ice not being the greatest, I just decided to put one on net.”

It was the Blue Jackets’ fourth consecutive game to go beyond regulation and their 18th one-goal contest of the season. They’re 9-2-7 in one-score games.

Kevin Stenlund also scored in regulation for the Blue Jackets and Oliver Bjorkstrand assisted on all three goals. Joonas Korpisalo made 25 saves as Columbus improved to 2-0-2 over its past four games.

Stenlund, who had gone seven consecutive games without a point, was initially listed as a healthy scratch Thursday. But he was re-inserted into the lineup when forward Mikhail Grigorenko took ill.

“Obviously, it’s a big boost for confidence, just at that part of the game,” Stenlund said. “We were down 2-1, and it was a big goal for us.”

Tortorella was asked about the original decision to bench Stenlund.

“I just want to notice (Stenlund),” Tortorella said about the center. “I’m not worried about mistakes, but I can’t have him blend in. That’s what I thought was happening with his game.”

Sebastian Aho scored both goals for Carolina, which has lost two in a row following an eight-game winning streak. Aho moved into a share of the team’s scoring lead with 13 goals with Nino Niederreiter, who had scored in each of the previous two games, and the injured Vincent Trocheck.

“It could snowball, but I don’t think it will,” Carolina coach Rod Brind’Amour said. “You have to fight for everything you get, and that’s what happened (Thursday). We just weren’t quite ready to dig in at the start of the game.”

The Blue Jackets had 14 of the game’s first 18 shots on goal before the Hurricanes got their footing.

“We did it in spurts the rest of the way,” Brind’Amour said. “It was a pretty even game after the first period.”