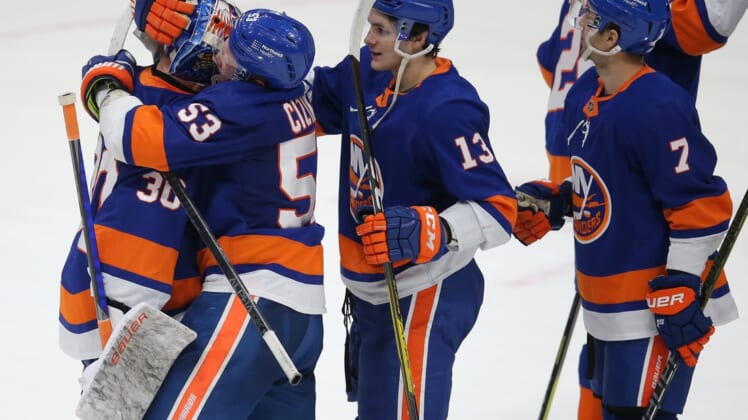 During the 1980s, the Nassau Coliseum was referred to as “Fort Neverlose” for the New York Islanders in the midst of winning four straight Stanley Cups. While the 2021 Islanders have yet to match the peak of the dynasty years, they have been impressive on home ice.

Moving into a new building next season, the Islanders returned to Nassau Coliseum for this season, and the move has brought dizzying success. In 12 starts at home, the Islanders have yet to lose in regulation, gaining 22 of 24 possible points, which includes three wins over the Boston Bruins, who visit Uniondale, N.Y., on Tuesday night.

The last time the Islanders did not get a point in a home game was a 6-2 loss to the Montreal Canadiens on March 3, 2020 in Brooklyn that was preceded by a 4-0 loss to the Bruins three days earlier on Long Island.

Including an overtime loss to Carolina in their final home game last season, a win on Tuesday would give the Islanders a point in 14 straight home games for the first time since setting a team record by going 28-0-2 from Jan. 2 to Oct. 30, 1982.

New York has scored 48 goals during the streak, including 15 in three straight 5-2 wins over the Buffalo Sabres. The Islanders swept a pair of afternoon games over the weekend by scoring seven unanswered goals in the two second periods.

“We get each other going,” New York’s Casey Cizikas said. “We want to make it hard and make other teams know they are in for a dogfight in our building.”

On Sunday, Anders Lee scored the first goal and Brock Nelson tallied twice. In the past dozen games, Lee has eight goals and Nelson seven. In the first 13 games, they had only six goals between them.

In Boston’s last three visits to Nassau Coliseum, the Islanders have outscored them by a 12-4 margin. After a 1-0 overtime loss on Jan. 18, Boston endured a 4-2 loss on Feb. 13 and a 7-2 drubbing on Feb. 25, when the Bruins allowed five goals in the third period.

At one point, the Bruins were on a roll similar to New York’s but they have cooled off. After the first visit to the Islanders, the Bruins went 9-0-1 in 10 games, but since Feb. 12 they are 3-5-1 in their past nine contests.

On Sunday the Bruins followed up Friday’s 5-1 rout of the Washington Capitals with a 1-0 home loss to the New Jersey Devils, which entered on a five-game losing streak. Boston had 40 shots on goal — the most for a regulation game this season — but were still shut out.