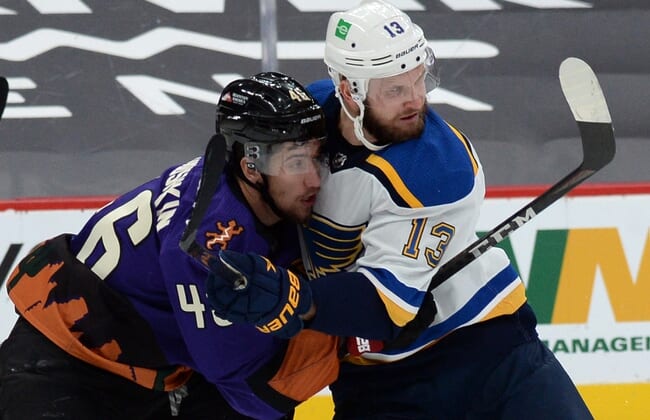 The Arizona Coyotes and St. Louis Blues will play the rubber match of their unique seven-game regular-season series Monday afternoon in Glendale, Ariz.

The Coyotes and Blues are in the midst of their lengthy series against each other due to COVID-19 postponements elsewhere in the NHL. Both teams earned seven points over the first six games.

“It’s a battle, it’s playoff hockey,” Arizona forward Barrett Hayton said. “We see it as a series. It’s seven games. Every night is a battle. They’re a strong team, a heavy team, obviously you see the success they’ve had. It’s a big competition, and every night it’s a fight.”

“Every game has been a battle so far,” said Blues winger Mike Hoffman, who scored 1:49 into overtime on Saturday. “But these are the ones you want to play. You don’t want to have easy games. It makes us a better club. We’ve got to expect the same thing the next game.”

The Blues extended their road winning streak to five games by winning twice on this trip to Arizona.

“Two wins is nice,” Hoffman said. “It would be nice to go home with the third one as well.”

Arizona has played stride for stride with the Blues during the series. Saturday’s game could have gone either way, just like the others in the series.

“They won the Stanley Cup two years ago,” Coyotes coach Rick Tocchet said Saturday night. “They’re a hard team to play, I don’t know what else to say. They pushed us, they scored some goals, and we lost in overtime.”

Both teams made lineup changes from game to game in the series for varying reasons.

The Blues will almost certainly go back to No. 1 goaltender Jordan Binnington (7-2-2, 2.50 goals-against average) in net for this game after starting backup Ville Husso on Saturday.

The Coyotes could return to Darcy Kuemper (4-6-1, 2.46 GAA) after starting Antti Raanta on Saturday. Kuemper has a .918 save percentage in his four starts against the Blues this season.