PREVIEW: Arizona Coyotes looks for sweep in Colorado against Avalanche 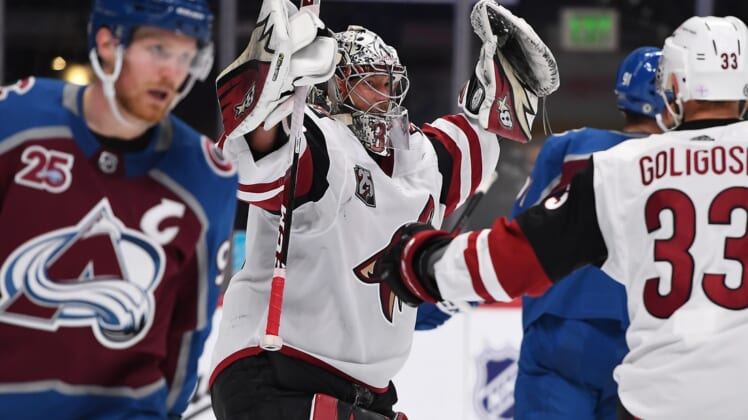 It may be the quirk of the NHL season in the midst of a pandemic, but 25 games into a 56-game schedule, the Arizona Coyotes have a better record on the road than at home.

Arizona continued that narrative with a 3-2 win at Colorado on Monday night and improved to 5-3 away from home compared to 7-7-3 on home ice. The Coyotes will try to go for the two-game sweep in Denver when the teams play again on Wednesday night.

Arizona won’t have its top goaltender for Wednesday, or for the near future, according to coach Rick Tocchet on Tuesday. Darcy Kuemper made 17 saves before leaving early in the third period of the Coyotes’ 3-2 win and Tocchet said Kuemper is heading back to Arizona to be evaluated.

Kuemper looked sharp in his second game back from a lower-body injury that sidelined him for four games, but he suffered an undisclosed injury against the Avalanche. While Colorado had possession of the puck Kuemper signaled to an official, and when the puck left the zone play was stopped, and Kuemper was replaced by Antti Raanta.

Raanta stopped all 16 shots he faced.

“Sometimes it’s also a little bit easier to just go in there quickly and you don’t have any time to think,” he said Monday night. “Just go there and the game keeps going. I was seeing the shots, and the shots I didn’t see, somebody blocked. Pretty much everybody was putting their bodies on the line.”

Avalanche coach Jared Bednar said after the game he was not disappointed with the effort despite his team falling behind 2-0 for the third straight game. He wasn’t pleased about the decisions in the final minute when goaltender Philipp Grubauer came off for an extra skater while Colorado was on the power-play.

“We go 40 seconds without someone taking control and shooting the puck,” he said. “I would have liked to have seen five, six, eight shots on goal in the last minute when you’re up 6-on-4 instead of passing it around looking for the pretty play.”

That might not be an issue for Wednesday’s rematch. Bednar said Tuesday that center Nathan MacKinnon will be back in the lineup after missing three games, but that defensemen Cale Makar and Bowen Byram won’t play. Both are dealing with upper-body injuries.

Bednar said Makar, last year’s Calder Trophy winner as rookie of the year, had a setback in his rehab and when he returns is murky. Makar, who has missed the last six games, skated Sunday and Monday.

“There’s no specific setback, I’m just not getting any information that says he’s coming back tomorrow,” Bednar said. “Until I hear from our medical staff or from Cale himself that he’s good and ready to play or gearing up to play our next game, I don’t know when that’s going to be.

“It could be as early as tomorrow or it could be two months from now. I have no idea. I know you guys want more specific information, but the facts are I don’t have any more information to give you.”