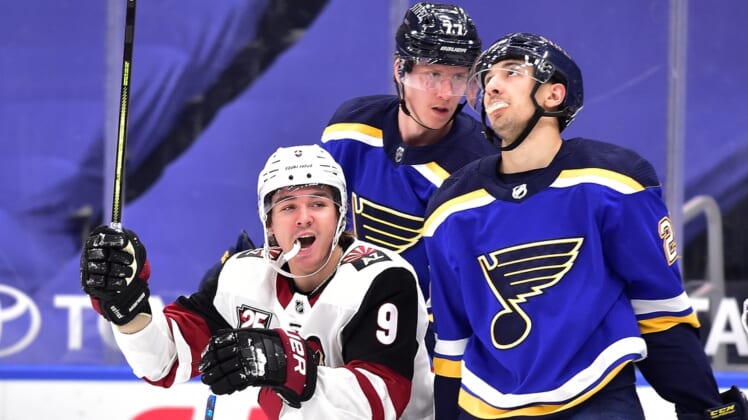 The Arizona Coyotes will play a different opponent for the first time in three weeks when they begin a back-to-back against the Los Angeles Kings on Thursday night in Glendale, Ariz.

Because of COVID-19-related scheduling gymnastics, the Coyotes played seven consecutive games against the St. Louis Blues. Arizona last played a game against a team other than St. Louis on Jan. 28 when it defeated the Anaheim Ducks, 3-2.

The Coyotes earned an impressive nine points (4-2-1) in their seven games with the Blues, which concluded with a 1-0 victory on Monday night. Clayton Keller scored the lone goal early in the second period, and Darcy Kuemper made it stand up with a 24-save performance for his 19th career shutout.

“I like the way we defended all series,” Arizona coach Rick Tocchet said. “(St. Louis) is a hard team. They won a (Stanley) Cup two years ago. They’re going to get chances. They’re a very good hockey team. To defend that team in seven games, it’s hard to do, and I’ve got to give our guys credit.”

Arizona blocked 15 shots, had 30 hits and killed two penalties, including a 5-on-3, to grind out the win, which had a playoff feel to it.

“If you’re going to win in the playoffs, you’ve got to win ugly games,” Tocchet said. “It’s a 1-0 game; the puck was bouncing. It was a muck-and-grind type of game. There was a lot of everything. You’ve got to win these games. You’ve got to close them out — and we did.”

“I think it’s a step in the right direction,” Keller said. “We have a lot of games left. … But now, it’s finally getting to play a different team and see a little different look. I think everyone’s excited for that challenge, but we have a long way to go.”

Los Angeles brings in a two-game winning streak, the most recent a shutout against the visiting Minnesota Wild, 4-0, on Tuesday night. Jonathan Quick, yanked in his previous start, a 5-2 loss at Vegas on Feb. 5, bounced back to stop 28 shots for his 53rd career shutout and first of the season.

“It’s a great feeling, he’s probably the one I was the happiest for,” Kings coach Todd McLellan said Tuesday. “It’s been a difficult week for him, for no other reason than he got pulled and we didn’t go back to him right away. That’s a tough thing when you have a storied career like he has.

“He worked real hard in practice and he was ready for tonight. He took advantage of the opportunity, and that’s what a true pro does.”

The two-game set at Arizona kicks off a six-game road trip for Los Angeles, which will also have back-to-backs at St. Louis and Minnesota.

“Probably our toughest road trip of the season lies ahead,” McLellan said. “Six games is as long as it’s going to get, and the teams we’re going to play right now are playing really well.”

Tocchet said Wednesday that defenseman Niklas Hjalmarsson, who left a 4-1 loss to the Blues on Feb. 12 with an upper-body injury, “is a good possibility” to play in Thursday’s game.