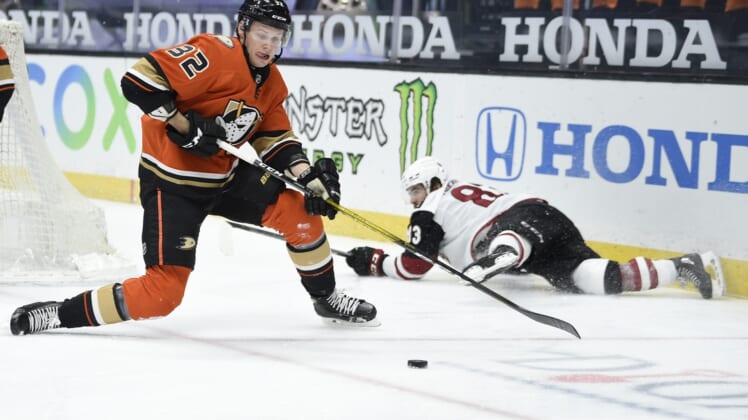 When the Arizona Coyotes kicked off their seven-game road swing with a victory over the Colorado Avalanche, hopes were high it was the beginning of a stretch that could put them squarely in the playoff hunt.

Instead, as the Coyotes prepare to end their sojourn Saturday against the Anaheim Ducks, it will be an opportunity to salvage something out of a disappointing run.

Since defeating the Avalanche 3-2 back on March 8, the Coyotes have lost five consecutive games (0-3-2), with Thursday’s 3-2 overtime defeat to the Ducks the latest disappointment. Over those five games, Arizona has scored just four goals, has been shut out twice and failed to score on 17 power-play opportunities.

Arizona’s loss Thursday might have been the most disappointing during the swoon. The Coyotes blew a 2-0 first-period lead against a Ducks team that is last in the West Division and had dropped four straight games, all in regulation.

“You can’t take your foot off the pedal at all,” Coyotes forward John Hayden said.

Even after watching the two-goal lead disappear, the Coyotes had a golden chance to win with a man-advantage in the final three minutes but could not convert.

Despite their struggles, the Coyotes were only four points back of the St. Louis Blues for fourth spot in the division before Friday’s action, but they are well aware a push must begin as soon as possible.

The Ducks, who went into Thursday’s game with only two wins in 15 outings, are destined to be spoilers as they begin a rebuild but enjoyed Thursday’s game for reasons beyond the rare win. Jamie Drysdale, a defenseman drafted sixth overall in 2020, netted one goal and one assist in his NHL debut, while Trevor Zegras, the ninth overall pick in 2019, scored his first NHL goal.

“There were definitely nerves since it was my first game. A lot of nerves, but mostly excitement,” Drysdale said. “It’s a really exciting time for me and my family. I was joking with (Zegras) on the way here, if I don’t fall on my (pregame) solo lap, it’s a win. It was a lot of fun.”

The milestones did not end there. Ducks veteran captain Ryan Getzlaf collected his 700th career assist, while goaltender Ryan Miller recorded his 390th victory, which moves him ahead of Dominik Hasek for 14th spot on the NHL’s all-time list. Miller has the most wins of any U.S.-born goalie.

Miller will be looking to add to his totals, as No. 1 netminder John Gibson was placed on injured reserve due to a lower-body injury.

“I was proud of our guys,” coach Dallas Eakins said. “They stuck with the game plan and they stayed in the fight. We had great pressure on Arizona right through the whole first period. Bang, bang, two (Arizona) shots and it’s in our net.