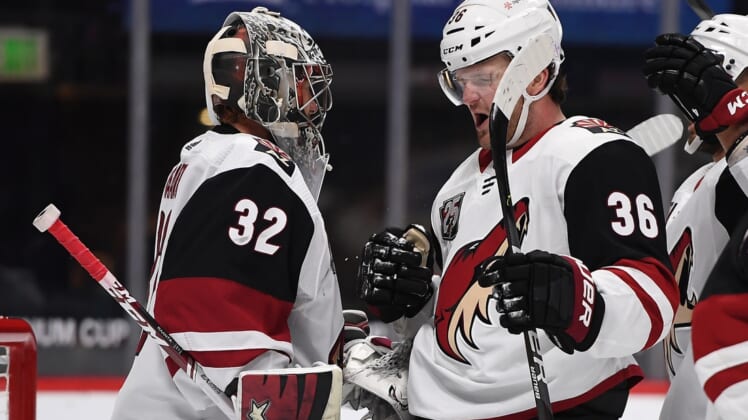 The Arizona Coyotes are struggling to score goals.

As a result, the Coyotes are just 1-3-1 on a seven-game road trip that wraps up with a pair of games against the Anaheim Ducks on Thursday and Saturday.

Arizona has scored only five goals in its last five games and has been shut out twice by the Minnesota Wild in the last week.

Right winger Christian Fischer promised the Coyotes’ spirits remain high, despite their most recent setback Tuesday when they were blanked 3-0 by the Wild.

“It’s no secret, for whatever reason we’re having a hard time getting just one (goal) past the opposing team right now,” said Fischer, who has only one assist this season. “Who (cares) if we’re scoring seven goals or one? We need to win games, and right now we’re in the dump.

“But no one feels bad for themselves. We need to stop this right now, otherwise we’re going to get ourselves in a hole. It’s pretty simple, we need to work our way out.”

The Coyotes were 3-for-3 on the penalty kill against Minnesota on Tuesday — 14-for-15 in their past four games. They outshot the Wild 31-26 but were unable to convert on four power-play opportunities, including a five-minute man-advantage in the first period and 1:09 of a 5-on-3 in the third period.

Adin Hill made 23 saves for the Coyotes. Hill, who took starting duties when Antti Raanta was a late scratch with a lower-body injury, has allowed three goals or fewer in 13 of his previous 14 appearances.

“Everybody’s stressed when you don’t score goals,” said Arizona coach Rick Tocchet. “We’ve had seven or eight breakaways in three games, and we haven’t scored. You get one, maybe it loosens some guys up.”

The Ducks are trying to regroup after giving up a 4-2 lead in an 8-4 loss Tuesday to the host Colorado Avalanche.

Adam Henrique had a goal and two assists, and Troy Terry added a goal and an assist. Danton Heinen and Derek Grant each scored once.

It was the Ducks’ fourth straight loss.

“(We) had a great first period with four goals, which is a big outbreak for our team, but we didn’t do a good enough job around our net,” said Ducks captain Ryan Getzlaf. “They had a lot of chances in the first period. (Ryan Miller) made some saves; they hit some posts, and we had a chance to win the hockey game. I felt we didn’t protect our net.”

The Ducks have been outscored 22-6 over their four-game losing streak.

Getzlaf shouldered the blame for the loss, saying he and linemates Max Comtois and Rickard Rakell shared a disappointing performance.

Getzlaf and Comtois were minus-3 on the night. Rakell was minus-4. None of them eked out a point among the Ducks’ four goals.

“We’re going to wear this for our team,” Getzlaf said. “I thought our guys did a great job of going out and getting momentum at different times in that game. It seemed like every time we stepped on the ice, the play was in our zone or the puck was in our net.

“We’ve got to look at our game and accept responsibility for that.”