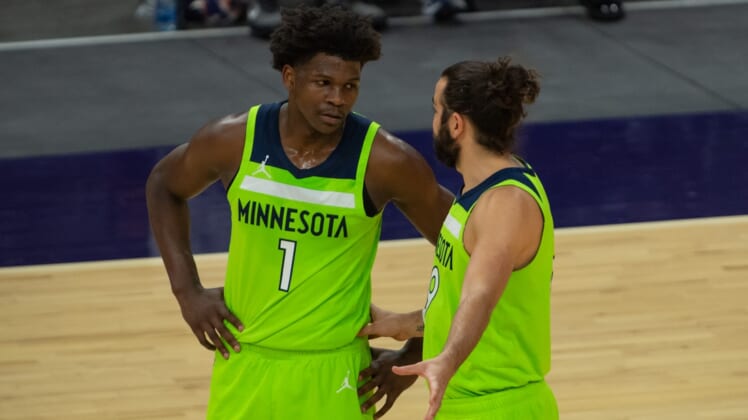 Anthony Edwards bristled recently at talk that the Charlotte Hornets’ LaMelo Ball was the NBA’s top rookie over the first half of the season.

The Timberwolves guard showed his disdain by saying people discussing that “can just kick rocks,” and now he is answering with his production as Minnesota looks to defeat the host Phoenix Suns on Friday for the second straight night.

Edwards (19 years, 225 days) became the third-youngest player in NBA history to record a 40-point outing on Thursday when he poured in a career-best 42 points in the Timberwolves’ 123-119 victory. The two youngest players to accomplish the feat are future Hall of Famers LeBron James (19 years, 88 days) and Kevin Durant (19 years, 200 days).

The Timberwolves had two players top 40 points on Thursday. Star center Karl-Anthony Towns scored a season-best 41 points to mark just the second time in franchise history that two players scored 40 or more in the same game.

Towns also was the part of the first occasion as he scored 40 and Andrew Wiggins scored 41 in a game against the Los Angeles Lakers on April 9, 2017.

“When I have a player like KAT alongside of me, it makes it way easier for me to be able to score the ball because they have to respect him because he can shoot it and he’s 7 feet,” Edwards said after the contest. “He takes a lot of pressure off me.”

The two-player explosion helped the Timberwolves win for the third time in five games following a season-worst nine-game losing streak.

Edwards is averaging 35 points over the past three games. He set a then-career best with 34 points against the Portland Trail Blazers on Sunday and followed up with 29 against the Los Angeles Lakers on Tuesday prior to the stellar outing against the Suns.

Minnesota coach Chris Finch said he spoke to Towns earlier in the day about how Edwards was really starting to come alive.

“Part of our approach now is our future success starts now,” the recently hired Finch said of a team that is just 10-31. “We have to try and put these guys in positions to grow into their roles and what we think their ultimate role will be.

“We love Ant’s fearlessness. Playing next to KAT, they have a nice little combination going. … He’s blooming for us at the right time. It’s not going to be expected to have this type of night every night. But we see that he has it in him.”

Phoenix star Devin Booker is averaging 39 points in two games against the Timberwolves this season. He scored a season-best 43 in a 118-99 win on Feb. 28 in Minneapolis. Booker scored 35 on Thursday, but he had just one point in the fourth quarter.

Booker helped the Suns build a 15-point lead five minutes into the third quarter before the club wilted and lost for just the fifth time in 23 games.

“Our game-plan discipline was not where it needed to be,” Phoenix coach Monty Williams said, “but that is all on me. I didn’t have us ready to play.”

Suns forward Mikal Bridges was unwilling to let his coach accept all the blame. Not on a night in which Phoenix committed 22 turnovers and allowed two opponents to combine for 83 points.

“No, he definitely got us ready. It’s on us,” Bridges said. “We didn’t come out and respect our opponent enough. Obviously they’re a good team and they’re in the NBA — they have good players. That’s not on him. That’s on us as players.”